These are just pictures of my book series that I have come to collect and love. :) (FYI: I have a WHOLE lot more than this, but most of them are not fully finished collections.) 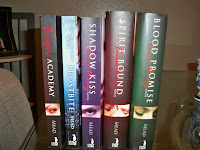 This is my beloved Vampire Academy Series If you haven't read these you should. I totally have my sister in law hooked now. LOL she sent me a text today "I really don't like how the 3rd book ended. I'm depressed now." and then "Omg, I don't think I can move on. It's so sad." Yes, I have converted another. I'm telling you I love these books. 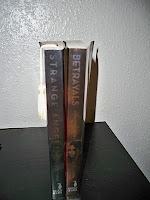 These are the Strange Angel books by Lili St.Crow. I've read the first one, and really enjoyed it because it had just about every creature you could think of. Sadly, I haven't finished the other books. I actually found out about this book from the back of my Vampire Academy book. 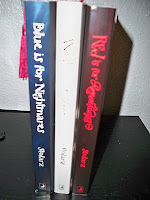 (Color) is for series by Laurie Faria Stolarz. I believe there are a few more books in this series. 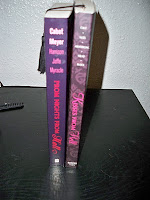 I call these books the "From Hell Series" They are actually anthologies from different authorsall of which are YA authors. There's also one calle vacations from hell which I have just not on here yet. 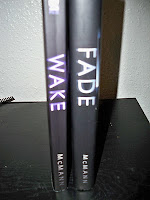 The Dream Catcher Series by Lisa McMann.Gone is the third book which I have and need to add to this picture.

These are the Evernight books plus Balthazaar by Claudia Gray. Balthazaar is a companion novel. I've read only the first two which I never reviewed on here becaus these were actually some of the first books I read before I started blogging. :) So I'm thinking of going back and re-reading them completely. because I've forgotten what has happened 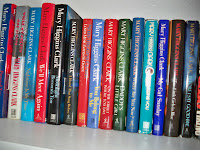 These are actually all the Mary Higgins Clark books I have. Before I began reading YA I read mystery books, and hers were the ones I enjoyed the most. Daddy's Little girl was my favorite. 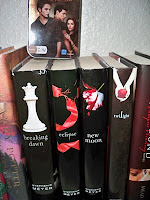 These are the twilight books. I don't think any YA collection is complete with out them. These are the reason I started reading YA. So as much as people hate on them I owe a lot to them.  I've probably read these like twice.  Just for the record I'm totally a Jacob Fan. No cold, sparkly vampire for me in this book. I like me some cuddly wolfs. 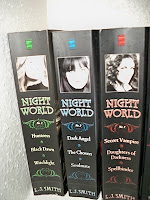 These were from what I remember great books I loved the different stories in each of them and how in the end they all linked together somehow. I'm pretty sure I'll re-read these and then put up some reviews. Written by L.J Smith,

These are The Immortals Series by Alyson noel. 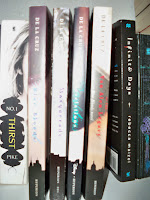 The Blue Bloods Series by Melissa De La Cruz. (sorry I kind of got a few others books in the picture my bad) This is a series about the Elite Group of Vampires (Blue Bloods), The Evil Ones (silve blood), and sometimes the Conduits (red bloods or humans)(It's mainly just Oliver) Then she has like a spin off I believe called Bloody Valentine. Also Keys to the Repository which is like a guidebook to the blue bloods . This is not a finished series yet so I don't have all the books. 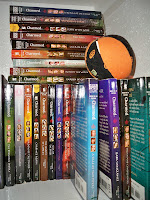 These are the charmed books from the hit Tv show (no longer running) I have all the seasons of Charmed. Love the show. So my friend bought me these for Christmas last year. I still need to read them. 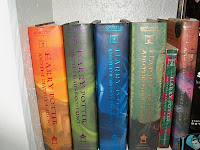 It's Harry Potter. I'm missing the 3rd book, that is just sad. I also need to get the hard back of the 2nd one. 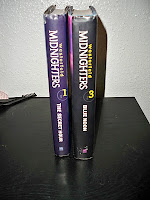 It's the Midnighters Series. I'm missing the 2nd as you can see. I  have a habit of buying books out of order. So until it is complete I usually don't read them. This series does sound interesting though. 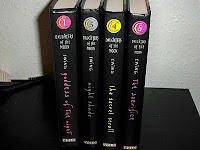 This series is called "The Daughters of the Moon" It actually has 13 books to it. I've read only the first one, but I have almost all now. These books are about 4 girls who come to find out they belong to a special group. Each book is a story of one of the girls. The girls are Vanessa who's invisible, Catty who's a time-traveler, Serena who's a mind-reader, and Jimena who sees the future. Then a fifth one comes in to it in a later book named Tiana who has the ability to move things with her mind. 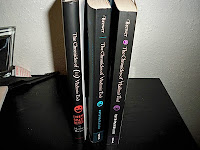 Vampires anyone? This is The Chronicles of Vladmir Tod. I have the first 3 books so far, and I 've only read the first two, but they're good. It's from a teen boys POV so it's different. 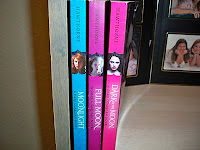 These are The Dark Guardian book. There's apparently a 4th one now.

This is the Hex Hall Series by Rachel Hawkins. All the books are hilarious. I've actually only written a review for this first book.

The Matched Trilogy by Ally Condie. I've read the first one and so far not impressed. 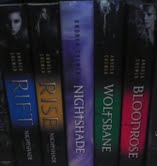 The Nightshade books. by Andrea Cremer (Rise and Rift the first two are actually prequels) I have only read Nightshade and Wolfsbane. I loved Nightshade but it kind of dwindled on wolfsbane so hopefully it will regain some in the third book. I read somewhere that she was going to make a few more books for it.

These are the Wolves of Mercy Falls Books by Maggie S. ( I never can spell her last name) I;ve read the first, but I adored Same and Grace as characters so I need to read the others. Also she has a few other series that are out as well.

These are the Trylle Trilogy books by Amanda Hocking. Which I haven't read, but heard they are really good.