A Child Call It Review 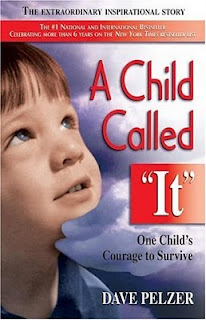 AUTHOR: David Pelzer
PUBLISHER: HCL
PAGES: 175
SERIES/STAND ALONE: Stand Alone (but I think it might have a book after it so maybe a series)


OUTLINE:This book chronicles the unforgettable account of one of the most severe child abuse cases in California history. It is the story of Dave Pelzer, who was brutally beaten and starved by his emotionally unstable, alcoholic mother: a mother who played tortuous, unpredictable games--games that left him nearly dead. He had to learn how to play his mother's games in order to survive because she no longer considered him a son, but a slave; and no longer a boy, but an "it."

MY THOUGHTS: I normally wouldn't read books like this, but it was the first book we read for our book club that my friend had started. Hints the reason for reading it. I've read alot of reviews on it, and some have me wondering if this is actually a believable story. I do have to say if the stuff that he talks about happend to him as a child it's beyond horrifying. I mean the things his mother would do to him; locking him in the bathroom with bleach and making him clean, to no food for days at a time, sleeping on a cot in the garage. I don't understand how through all that happened his dad didn't do anything he sat there watching this neglect. I mean this poor child had no one to stick up for him. It did read like it was being told from his point of view as a little kid. At first it's starts really good his family was happy they did things together picnics and all. the one day something inside his mom flipped and bang. What's worse is that this only happened to him and not his older brother. Like I said I normally wouldn't take a second look at a book like this, but it was chosen for us. I guess I could have put it down and stopped, but I was wrapped up in this little boys experience.

Now on the other hand I've heard where it's complete lies and that his life wasn't at all like he described in his book. So if that's the case it's really sad that he would use something so traumatic for others just to make a few dollars.

Either way it was an ok read and easy, but be warned it's not for the faint-hearted

Posted by Ashley @ Bookaholics Anonymous at 2:45 AM