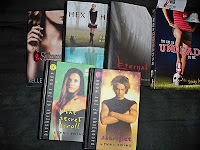 In my mailbox is hosted by Kristi at www.thestorysiren.com 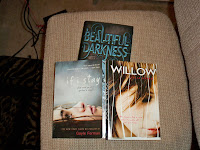 I was excited for this one to come up because like I said in a previous post I splurged Friday at HPB. So here goes....First of all my lovely stash I have

First my friend gave me a copy of her book that got published in Septemeber. Yeah it took me that long to get it from her. It's called Heinous Crimes, Immoral Minds by Aubrey Becker. It tell the story of Leyla whose step father, Richard murders her mom is sentenced to prison but gets out and stalks her and her brother, Cameron threatens Richard and gets in caught. After all that a few years go by and he calls Leyla to come take him to the hospital because his "Dying". What happens after that well why not check it out. It's an easy read.

Nightshade, I went out and bought Tuesday at walmart. I couldn't help myself. Beautiful cover and the reviews it's been getting are good.

The Secret Scroll (Daughters of the moon series 4) by Lynne Ewing. I bought at HPB friday with a crap load of others.

The Sacrifice (Daughters of the Moon 5) by Lynne Ewing. Bought at HPB. These I got because I read the first book in the series and well I like to finish my series I start.

You're so undead to me by Stacey Jay. It has zombies in it. What more could you want?

If I stay by Gayle Forman. Bought from target. It sounded interesting, and I loved the cover.
In a single moment, everything changes. Seventeenyear- old Mia has no memory of the accident; she can only recall riding along the snow-wet Oregon road with her family. Then, in a blink, she finds herself watching as her own damaged body is taken from the wreck...

The Summoning by kelley armstrong. HPB. I've just been meaning to read this series.
Beautiful Darkness by Kami and Margaret. Target bought. I finally got around to finding it.

Willow by Julia Hoban. Target bought.
Seven months ago, on a rainy March night, sixteen year- old Willow’s parents died in a horrible car accident. Willow was driving. Now her older brother barely speaks to her, her new classmates know her as the killer orphan girl, and Willow is blocking the pain by secretly cutting herself. But when one boy—one sensitive, soulful boy—discovers Willow’s secret, it sparks an intense relationship that turns the “safe” world Willow has created for herself upside down.

Hex Hall by Rachel Hawkins. I bought this at HPB. I was so happy to see it because I wanted to get it. I think I'm liking the books dealing with other wordly Academies. *shrugs*

Eternal by Cynthia Smith. HPB bought. This was an impluse buy. I liked the cover and the back sounded interesting.
That is all 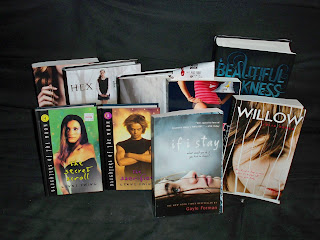 So what'd ya think? Did I catch your attention with any? Drop me a line! I comment back.
Posted by Ashley @ Bookaholics Anonymous at 1:25 AM

Email ThisBlogThis!Share to TwitterShare to FacebookShare to Pinterest
Labels: books, in my mail boc, meme