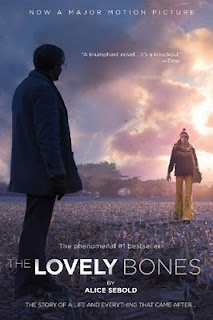 OUTLINE: When we first meet 14-year-old Susie Salmon, she is already in Heaven. This was before milk carton photos and public service announcements, she tells us; back in 1973, when Susie mysteriously disappeared, people still believed these things didn't happen. In the sweet, untroubled voice of a precocious teenage girl, Susie relates the awful events of her death and her own adjustment to the strange new place she finds herself. It looks a lot like her school playground, with the good kind of swing sets. With love, longing, and a growing understanding, Susie watches her family as they cope with their grief, her father embarks on a search for the killer, her sister undertakes a feat of amazing daring, her little brother builds a fort in her honor and begin the difficult process of healing.
STARTED: 2010
FINISHED: 2010
OPENING LINE: My name was Salmon, like the fish; first name, Susie. I was fourteen when I was murdered on December 6, 1973.
MY THOUGHTS:
This book is told from the view point of Susie Salmon, who died at age 14, as stated above. As she sits up in the Heavens watching her family and friends live their lives without her.Knowing that their lives won't be the same. As, her parents marriage starts to get rocky from her Dad's persistence to find his daughter's killer, and her mom's supposed affair with one of the townspeople. Her sister growing up to become her own person finding friendship, and a classmate Susie never really knew who feels her presence. Could something more come from that? All this happening while her killer romes the town free and clear. Sooner or later Susie's going to have to let it go leaving the living world behind, but not before getting to do something she missed out on.
I think what intrigued me the most about the book was the way the author decribed heaven, and just things in general. There's a few things that make me love a book, and the description is one of them. I like to be able to read and imagine with my mind what the places look like and see how the characters act in situations. I think Alice Sebold did a very good job of it.

Movie- This is probably my favorite book to movie-movie LOL. I love the imagery. It didn't hurt that they had Mark Wahlberg in it either. :)