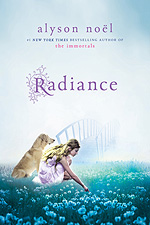 OUTLINE: Welcome to the Here & Now
Riley Bloom left her sister, Ever, in the world of the living and crossed the bridge into the afterlife—a place called Here, where time is always Now. Riley and her dog, Buttercup, have been reunited with her parents and are just settling into a nice, relaxing death when she's summoned before The Council. They let her in on a secret—the afterlife isn't just an eternity of leisure; Riley has to work. She's been assigned a job, Soul Catcher, and a teacher, Bodhi, a curious boy she can't quite figure out.
Riley, Bodhi, and Buttercup return to earth for her first assignment, a Radiant Boy who's been haunting a castle in England for centuries. Many Soul Catchers have tried to get him to cross the bridge and failed. But he's never met Riley...


MY THOUGHTS: This is a spin off from "The Immortal Series" that included Evermore, Blue Moon, Shadowland, Dark Flame, and Night Star (Coming In Nov) This new series follows Riley, Ever's little sister, whose dead.
She thinks that being dead is going to be a relaxing thing just being with her parents and her pup Buttercup. Well, little does she know that higher authority have other plans for her like Soul Catching. With this new job comes a teacher Riley would rather not have at the beginning, Bodhi, he's kinda the nerd. As the story goes on they go to a castle in England to try and get the "Radiant Boy" to cross over, but little do Riley and Bodhi know it's not that easy, and there's much more to the castle then just Radiant boy.Who else lurks in the castle?  Riley and Bodhi have a bet going that if Riley can get the boy to cross over she'll get Flying lessons. So this encourages her a little more. Riley goes through some stuff while at the castle trying to get the Radiant boy to do what she wants, and it's funny at times because she's dead and there's nothing that could hurt her. Yet she still has fears.
All in all I enjoyed this book very much. It's tiny and an easy read and the afterlife world that Noel creates is beautiful. I loved Riley as a character in the immortal series as a snobby little sister, and being able to see her in this series as her ownself and trying to find herself I guess you could say was great. She had a little bit of an attitude, but what kid doesn't.  I'm ready for the next book to be out, but sadly, I have to wait til next year.
I'm a sucker also for beautiful book covers and this one def is beautiful. I love the colors it has and how to me it looks like maybe what the author had in mind for the Here.
I did have one complaint though. It wasn't necessarily for the book, but I'm wondering why the pages were so uneven? I thought it was just that book, but they all were like that. :(  (I also noticed that's how the Nightshade books are too)

So tell me what you thought. Have you read the book? If so did you like it? Leave me some comments.