OUTLINE:
Could you survive on your own, in the wild, with every one out to make sure you don't live to see the morning?

In the ruins of a place once known as North America lies the nation of Panem, a shining Capitol surrounded by twelve outlying districts. The Capitol is harsh and cruel and keeps the districts in line by forcing them all to send one boy and one girl between the ages of twelve and eighteen to participate in the annual Hunger Games, a fight to the death on live TV.

Sixteen-year-old Katniss Everdeen, who lives alone with her mother and younger sister, regards it as a death sentence when she steps forward to take her sister's place in the Games. But Katniss has been close to dead before—and survival, for her, is second nature. Without really meaning to, she becomes a contender. But if she is to win, she will have to start making choices that will weigh survival against humanity and life against love.

MY THOUGHTS:
Alright I know I started this back in October sometime and it's taking me this long to finish. I will say this after I picked it back up again I stayed with it til the end and it only took me a week or so to finish it after my intial start.

My reason for stopping it was I couldn't really get into like the first 100 pages or so to me were extrememly boring. I know it told about the characters (mainly just Katniss)and some about Gale, but still I like my books to start off good, and it didn't happen til Part 2 which was the actual games. That was page 130 or something. After the games actually started though it became a little more interesting to me. I liked being able to see the Peeta/Katniss thing. It did irritate me to find things out about Peeta though. Reading through the games was actually really interesting how the tributes interacted with each other. Throughout the games I was cheering for Katniss and Peeta both though, even though I knew the outcome. One part made me sad though with one of the tributes. It shouldn't have suprised me because I watched the video that was made on youtube so it spoiled it for me but still. It was actually a very good video. This was actually my frist Dystopian book to read maybe I just need to read a few more to like them a little better. I don't know.

I liked the main character Katniss Everdeen. She was brave to take her younger sisters spot at the reaping. I honestly don't know if I could have done it. I'm a bit of a chicken. Would you have been able to sacrifice yourself for someone you loved? I like she's a very strong character and refuses to give up, and of course defies authority. What good character doesn't do that? Her emotions throughout the book jumped around too. From Gale to Peeta to her family to the tributes, her mentor and others. I like being able to see that characters can have emotion it makes you feel for them. All in all I'm not really sure who I want to see Katniss end up with. Humm? Guess I'll have to read on.

At first I wasn't really feeling Peeta just because alot of the stuff he did made me mad. How could he treat Katniss the way he did, but then I forgave him. That didn't really last long though because of the other stuff that happened. Stupid Peeta. I guess he had he's reasons though because who could compete with Gale a lifelong friend of Katniss'.

I can't really say much about Gale because he was only  in the book for a few chapters so it didn't give me a whole lot of time to like or dislike him, but from what was in the book I liked. He was apparently crushing on Katniss. :)

The other characters: Haymitch Katniss and Peeta's Mentor who was the only one to win the games from District 12. Effie who well I can't remember who she was but she was with them at the capitol, very snotty woman too. I kind of wanted to hit her. The Capitol, the authority, didn't like them at all. Rue, she seemed like a cute little character and a good friend to someone. That's about all the characters I can think of that
mattered.

FYI- This was cool I was sitting in the line for Harry Potter, and was about to read the book some, and some guy started asking me if I liked the book and what I thought about it. He said he needed to read it, or was going to I don't remember exactly. It kind of through me for a loop. I had to be honest with him though. I told him it was a little slow at first but ok. :) I know I'm a total dork.

MEMORABLE QUOTES:
-What's your name? (Gale)
Katniss. (Katniss)
Well catnip, stealings punishable by death, or hadn't you heard? (Gale)
-See, like this. I'm smiling at you even though you're aggravating me. (Effie)
Yes, it's very convincing. (Katniss)
-Then lie make something up (Haymitch)
I'm not good at lying. (katniss)
Well you better learn fast. You got as much charm as a dead slug. (Haymitch)
-Stupid people are dangerous (Katniss)
-How's everything with you? (Katniss,in a tree talking to other tributes below)
Well enough. Yourself? (District 2 boy)
It's been a bit warm for my taste, but the air's better up here. Why don't you come on up? (Katniss)
I think I will. (District 2 boy)
(I loved this little exchange between them because you can tell she's taunting them)

BOOKCOVER:
This is the german bookcover to the hunger games. I actually like this one alot better. :) 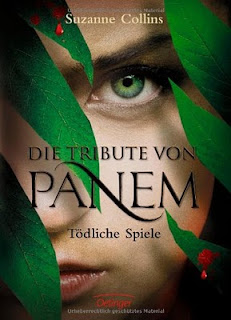 I gave it 3 out of 5. Just for the fact at I stopped at the beginning because like I said I was uniterested at first.

So I'm curious did anyone else fill the same way as me? Or am I the only one? I know alot of reviews I read everyone loves it. :(
Posted by Ashley @ Bookaholics Anonymous at 8:42 PM