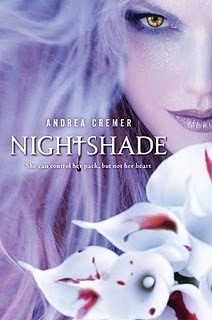 OUTLINE: Calla Tor has always known her destiny: After graduating from the Mountain School, she'll be the mate of sexy alpha wolf Ren Laroche and fight with him, side by side, ruling their pack and guarding sacred sites for the Keepers. But when she violates her masters' laws by saving a beautiful human boy out for a hike, Calla begins to question her fate, her existence, and the very essence of the world she has known. By following her heart, she might lose everything--including her own life. Is forbidden love worth the ultimate sacrifice?

MY THOUGHTS:
Wow that's all I have to say. I absolutely loved this book it brings a whole new perspective to wolves. I know that's probably been said tons of times before, but it truly does. It shows the different ways one can become a "were"wolf rather then it just being in the genetics. It takes it ahwile, but it does tell more of the Guardians and Keepers history. It was fun to learn about the worlds that Andrea Cremer made. Where the Keepers are pretty much the Guardians masters whether they see that or not.

The whole time I was reading this I'm like I have to finish it now. I want to know what happens with the whole love triangle between Calla, Ren, and Shay. This book really does have everything though. The romance, action, high school drama, hot guys, bitchy girls just the normal stuff.

Calla was an excellent main character, the alpha of the Nightshades, strong willed but at the same time she knew where her loyalities lied. (okay most of the time). She had her moments of being a smartass. I actually felt kind of bad for her having two guys that liked her, and her loyalities pulling her one way and her heart pulling her the complete opposite way.

Shay he is by far my favorite character in the book. Who would have thought right? I figured after I read the whole book maybe it would swap to Ren, but it didn't my loyalities lie with Shay. :) I love what happens to him in the book too. I was ecstatic. Yeah I'm just trying to use fancy words. LOL I was happy though. If you haven't read then too bad you won't know why, but if you have Who was happy about it?
Ren my love for his character comes and goes. One minute he's super sweet to Calla, the next he's ready to bite her head off. He's like an emotional rollercoaster, a trainwreck waiting to happen. I know he's the alpha male of the Banes, but he was to "she's mine only mine" type thing. Possessive that's what you call it. LOL. I guess only because they were meant to be together, and sometimes it didn't quite seem like she was feeling that. Still though he had some moments.

As for the other characters like the Banes Keepers, Efron and them I disliked them. They were creepy which I guess is how they were suppose to be. Nightshade pack Bryn, Ansel, Mason, Fey very good supporting characters. Mason was a diverse character and I liked that. You're starting to see more and more of that in these books like the HoN Series, Hex Hall, My Blood Approves, and a few others I can't remember.

So I'd say all in all I liked it very much. It never did have a really slow part in it. You know how some books take a few chapters or half the book to get going and get into the actual story. I definitely can say this one did not have that problem. Which for me is a good thing because that's one thing I'm not fond of.

MEMORABLE QUOTES:
-Finess, my ass. I'm a warrior, not your child bride. (Calla)
-I respect ren. He's my friend. We'll be fine together. A friend....sort of ren watches me like I'm a cookie jar he wouldn't mind being caught wit his hand in. And he's not the one who'd pay for that theft. (Calla)
-Whoa hurrican Naomi strikes, leaving no survivors. (Ansel)
-Just because wearing panty hose gives you a death wish. Doesn't mean I have one too. (Ansel talking about Calla's driving )
-They're just clothes Cal. It's not like mom made you go out and get a boob job. (Ansel)
-I'm not just another one of your groupies Hefner (Calla to Ren)
-Every girl I know says Pride and Predjudice. Or some other jane austen tale of class-obstructed love, conflict and---insert longging sigh here, marriage. (Shay talking to Cal about their favorite books)
-Are you insane? What did you want to do with it---grab the bear skull and try to teach it to play fetch? (Shay)
-Oh God, Cal. It's spreading; I can see it happening. It's eating away at you. (Shay)
Thanks for the update I feel much better. (Calla)
-Just add it to your list of things you weren't suppose to do but did anyway. it's starting to get long. (Shay)
-Do you have another order for me, O great Alpha? (Shay)
Don't be a jerk. We have enough work to do without you turning our research sessions into a soap opera.(Calla)
-Ansel, I'm not the sun; stop orbiting and get in here. (Calla)
-And you look beautiful (Bryn)
I look like a cake (Calla)
But a beautiful cake (Bryn)
-*SPOILER QUOTE*I didn't realize I had to point out that if we are attacked by a fire breathing bitch you can change forms. (Calla)
Check, fire breathing bitches make Shay a wolf boy. (Shay)
-Shay strolled alongside me, humming Here comes the bride, until I punched him in the kidney. (Calla)

Well that's it tell me what you thought. Have you read the book? If so what'd you think about it? Leave me a message and I will probably reply. :)
Posted by Ashley @ Bookaholics Anonymous at 3:10 AM