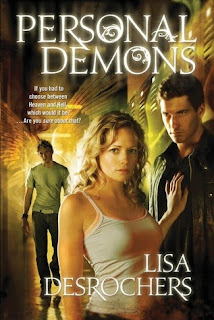 OUTLINE: Frannie Cavanaugh is a good Catholic girl with a bit of a wicked streak. She's spent years keeping everyone at a distance—even her closest friends—and it seems her senior year will be more of the same...until Luc Cain enrolls in her class. No one knows where he came from, but Frannie can't seem to stay away from him. What she doesn't know is that Luc works in Acquisitions—for Hell—and she possesses a unique skill set that has the King of Hell tingling with anticipation. All Luc has to do is get her to sin, and he’s as tempting as they come. Frannie doesn’t stand a chance.

Unfortunately for Luc, Heaven has other plans, and the angel, Gabe, is going to do whatever it takes to make sure that Luc doesn’t get what he came for. And it isn't long before they find themselves fighting for more than just her soul.

But if Luc fails, there will be Hell to pay…for all of them

MY THOUGHTS:
OMG! I mean what else is there to say. I know it took me a bit to read this, (it usually take 2 or 3 days I haven't been in my reading mode Sorry!) I finally sat down earlier, and thought okay I'm going to read a few chapters. That didn't happen I read the whole thing from page 170 (that's where I left off a few days ago) I think it was just that after reading some I wanted to finish the book and see what happened with Luc, Gabe, and Frannie. I'm so happy I did too. I loved it mucho.

The little outline-y thing pretty much tells you what the story is about. I don't see a need to go into details on that because usually if I do that. I pretty much make a spoiler review, and I hate that.

The book is told in two perspectives (I like big words, POV just sounds boring. lol) those being Lucifer aka Luc, our darling demon from the fiery pits, and our not-so catholic school girl, Mary Frances better known as Frannie. I'm usually not fond of this just because I find that it's hard to read, but Lisa's way worked really well. I actually could follow along quite well. You got to feel what both the characters were feeling about the same thing at the same time, but not so much. Does that make sense? If not sorry you just have to read it to know I guess.

I liked Frannie as a character most the time (sometimes I did get mad at her for not just picking Luc or Gabe because truthfully I probably couldn't either) I wished at times she would just say why she was feeling so guilty and let it go, but that was part of the story so all is well. :)

Luc he started off as a bad-ass, cocky, know it all demon. Later down the pages he softened some not much. I wanna demon like him! I can't say to much because I don't wanna give much away about him, and what happens.

Gabe was the angel and I was actually sad to see that he didn't have a bigger part then he did. I really would have liked to know more about him. At times he did kind of seem like a butt-head, but he's an angel so he knew where his place was, and knew not to get mixed up to much with Frannie. Just enough to try and keep her "safe". Here's to hoping he'll have a bigger part in the next book.

The other characters were pretty good too. Although I really wanted to hit Taylor sometimes. She was definitely a "B". Riley on the other was the complete and total opposite. Like they say though opposites attract. (It's funny cause my friend and I are like that) (Oh also it's funny too I have two cousins that are sisters whose names happen to be Taylor and Riley. Just a sidenote)

The ending I was thrilled with although it was not what I was expecting it most definitely was a plus. :) If you're confused or don't know if you want to read this. I whole heartly suggest it. You'll be wanting your own Angel and Demon after you meet these two. :)  I know I do. There's no way in Hell  (pun SO intended) I could choose between these two. I know in some books you can somewhat form a side you like better. I can honestly say I can't do that in this one.

MEMORABLE QUOTES:
-If there's hell on Earth, it's High school. (Luc) This was the opening line to the book.

-She's got more wrinkles then a shar-pei (Luc)

-So maybe that's my problem I need pink hair. (Luc)

-There's no crying in baseball, and no love in Hell. (Luc)

-Unholy Hell (Luc) He says this alot I thought it was cute. :)

-Because I love her, but can't have her (Luc) Poor Lucifer!

-If you have power to transform shit-for-brains over here (Gabe) For an angel he's awesome.

-That's like saying I beat you in poker cause I stacked the deck, but you're glad I have all you're money. (Frannie)

-You've got archangels quaking in their boots (Gabe) This reminded me of Supernatural for some reason.

-Are you done beating me up? (Luc)
Are you done pissing me off? (Frannie) Ok so this one was within a scene that I literally laughed out loud at. They were pulled over on the side of the road from something that Frannie had told him. Some car had stopped to see if she was okay having just pushed Luc down it looked like they were fighting. Its just funny cause Luc smiles and laughs through it all and then Frannie realizes it looks funny and starts laughing too. Poor guy in the car was confused. Anyways, loved this scene.

-Tag you're it (Frannie) This was by far my favorite quote. You have to read to find out why. :P

So have you read the book? What did you think of it? Let me know I always comment back.
Posted by Ashley @ Bookaholics Anonymous at 11:41 PM