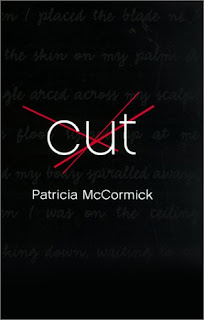 OUTLINE: Fifteen-year old Callie is so withdrawn that she's not speaking to anyone including her therapist at the residential treatment facility where her parents and doctor send her after discovering that she cuts herself. Her story unfolds primarily through dramatic monologues, gradually revealing the family turmoil that led to her self-destructive behavior. Her little brother, Sam, is ill he nearly died in her care. Since Sam's illness, Callie's mother has become so worried and fragile that she rarely leaves the house. Her father has responded to the psychological and financial stress of Sam's illness by disappearing into his work, and when that doesn't work, into his drinking.

MY THOUGHTS:
I went into this book not really knowing anything about. I saw it on the shelf at HPB, and the cover kind of drew me in, along with the title. A little weird I know, but if you knew my background when I was younger. I don't think it would be so weird. (Trust me my poetry is proof) I went into the book thinking it would be good (not in like a happy sort of way), but more of an emotional way. I wanted to like it, but it just didn't have the connection with the characters I was looking for I guess.

Callie is the main MC who gets sent to this "rehab" center called Sea Pines, or in the words of the girls that go there "Sick Minds" (I thought this was kind of cute) because of her addiction to cutting. While she's there she doesn't really seem to wanna make any attempts to get better. She doesn't talk to anybody there, not the girls, counselors, or in group. In that way it's kind of hard to follow because you have mostly her thoughts on the girls, the counselor, and others at the place. No actual interaction until almost the end. At the end like I said is when she started to actually open up to people, and started telling her story as to why she was there, and the guilt she had from her brother being sick, and her mom having to deal with her brother, and then her dad's business.

The other characters in it Debbie, the over-weight girl, Becca and Tara the anorexic girls, and Sydney and Tiffany who are addicted to drugs. Then a new girl named Amanda shows up later whose also a cutter. Honestly I couldn't make myself like any of  them except maybe Amanda when she showed up just because she seemed like she didn't care. She had that smart-ellic attitude.

So I'm kind of torn between how I feel about the book. I think it could have been more thought provoking for readers had it more details I guess you could say. This is one of those type books where it's hard to write about because I don't really know how to put it into words. It was apparently a banned book too although I didn't see the explicitness of it. That is just me though. *shrugs*

Still remember though just because it didn't work for me. It still may work for you and it really is a short read. :)
Posted by Ashley @ Bookaholics Anonymous at 9:02 PM