Well I have a video made for it, but stupid you tube won't upload it right now. This is for those who visit now!

I put my video up in another post.
You know it's nice when you go into a bookstore and they ask you about the books you're getting. I was checking out at HPB and the cashier was asking me what I thought about the City of Ashes book I bought. He said he really needed to read the series what did I think. I told him I haven't read it either. Then he told me how he had lots of other books and stuff. I told I did too. I like being able to talk to me people about that kind of stuff. :)

So as of right now here is just a boring old list:

Borrowed:
Water for Elephants by Sarah M. (thanks guys)

Half Price books:
TTYL by Lauren Myracle
Vactions From Hell by 5 Authors
Ruined by Paula Morris
Before I Die by Jenny Downham
As You Wish by Jackson Pearce
City of Ashes by Cassandra Claire 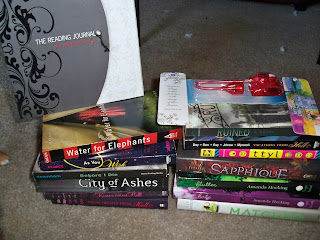 This was everything together. 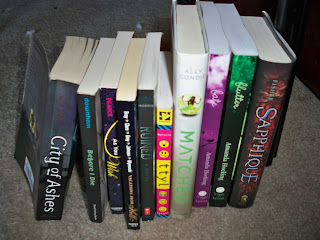 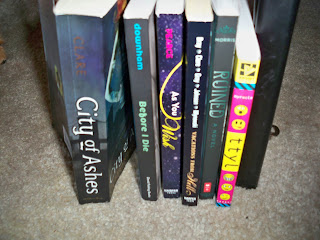 My Half Price books I bought
Ashley
(FYI- I'm reading TTYL now because it's kinda an easy read..it's different but in a cute way. Review will be up when finished)
Posted by Ashley @ Bookaholics Anonymous at 2:35 AM

Email ThisBlogThis!Share to TwitterShare to FacebookShare to Pinterest
Labels: books, fun, in my mail box