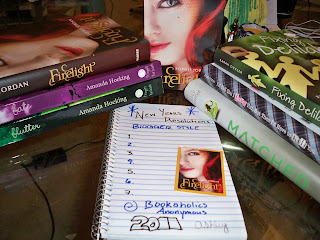 Alright I never actually set any kind of resolutions for the new years because I know that I won't keep them. All those lose weight, stop smoking (even though I don't smoke), be more outgoing, and all that junk  Those never really fit my style, but now I have something that I can actually try for: books and all that pertains to books (and blogging of course) :) The idea came for me to do it from Melissa @ My World..in words and pages.

I honestly think there's probably more, but as of right now I can't think of any. Stress will do that to you.

So here's to trying to make my goals next year. What are some of your goals?