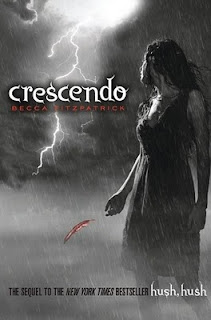 OUTLINE: Nora Grey's life is still far from perfect. Surviving an attempt on her life wasn't pleasant, but atleast she got a guardian angel out of it: a mysterious, magnetic, gorgeous guardian angel. But, despite his role in her life, Patch has been acting anything but angelic. He's more elusive than ever and even worse, he's started spending time with Nora's arch-enemy, Marcie Millar.

Nora would have hardly noticed Scott Parnell, an old family friend who has moved back to town, if Path hadnt been acting so distant. Even with Scott's totally infuriating attitude Nora finds herself drawn to him - despite her lingering feeling that he's hiding something.

Haunted by images of her murdered father, and questioning whether her nephilim bloodline has anything to do with his death, Nora puts herself increasingly in dangerous situations as she desperatly searches for answers. But maybe some things are better left buried, because the truth could destroy everything - and everyone - she trusts

MY THOUGHTS:
The second installment of the Hush, Hush series is definitely a rollercoaster of ups, downs, and twists. It had me wondering practically the whole book who the black hand was, and what she/he wanted with Nora. I'm telling you poor Nora always has something going on with her. Someone always wanting to hurt her, telling her what to do.

At the beginning of the book things seemed to be going good considering the incidents in the last book, but as soon as I got comfortable with Nora and Patch's relationship that's when things went downhill again. :( I had a few "I wanna throw this book moments" not that I actually would because I like keeping my books in excellent condition if possible. Though there were the moments.

I loved the new additional characters to the story, Scott, Nora's childhood friend (Oh the love triangles in YA), Rixon (was he in the other book. I can't remember) was Vee's love interest, and then of course the mean girl Marcie. I hated Marcie with a passion she seemed like she cared only about herself, which most girls like her do.

And the ending, wow that was an ending. That's all I'm going to say. :)

I know this is a short review, and probably no help what so ever. I feel like there's only so much you can say about a book that you like with out given away the juicey stuff. This book is full of juciness for sure. I can't wait to see how things end. Muahahahaha!

Want to know more about the other characters. You will have to read my Hush, Hush review.


QUOTES:
-You know what the worst part is? Nora
That I was right, and now you have to suffer through hearing me say "I told you so." Vee
-Why can't we just text? Nora
Spies don't text. Vee
How do you know? Nora
How do you know they do? Vee
-And here I thought they were called Peeping Toms. Patch
-How about you sell me the 'stang for 30 dollars? I can even pay cash. Nora
Drunk, but not that drunk Grey. Scott
-What is that? Vee
I think it's a car boot. Nora
I can see that. What's it doing on my car? Vee
I guess when they say violators will be towed. They mean it. Nora
Don't get smart with me. Vee
-My sense of adventure stops short of a kamikaze suicide mission. Vee
-We still have two legs, Leftie and rightie. Vee
-I'm not stealing it. We're stranded. It;s called borrowing it. Nora
- I think we should stop at skippy's for hot dogs before we do this. I don't know what it is about hot dogs, but they're like an instant shot of courage. I feel like I can do anything after I've had a hot dog. Vee

So, so have you read the books? If so what did you think? Were you expecting that kind of end to the book? If not, are yoo planning on ireading it? :) Remember I always comment back on here. Don't be afraid to chat with me.