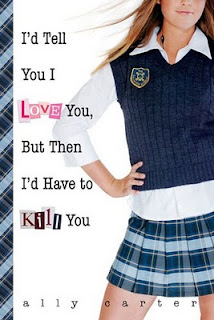 OUTLINE:Cammie Morgan is a student at the Gallagher Academy for Exceptional Young Women, a fairly typical all-girls school-that is, if every school taught advanced martial arts in PE and the latest in chemical warfare in science, and students received extra credit for breaking CIA codes in computer class. The Gallagher Academy might claim to be a school for geniuses but it's really a school for spies. Even though Cammie is fluent in fourteen languages and capable of killing a man in seven different ways, she has no idea what to do when she meets an ordinary boy who thinks she's an ordinary girl. Sure, she can tap his phone, hack into his computer, or track him through town with the skill of a real "pavement artist"-but can she maneuver a relationship with someone who can never know the truth about her? Cammie Morgan may be an elite spy-in-training, but in her sophomore year, she's on her most dangerous mission-falling in love.

MY THOUGHTS:
As the outline says the book follows Cammie (and friends Bex, Liz, and later in the book Macey) on an undercover mission to find out if the boy Cam likes is what they call a Honeycutt. In between following the boy Cammie and friends deal with going to classes, lying to the adults, fake cov-ops missions, learning to accept new friends, and more events in the life of a Gallagher Girl/Spy. The beginning of the book is basically telling you that this is going to be like a report the main character is doing. (it's not written like a report just parts are)

This was a first for spy books I've read, but it was great. I loved the whole private school for girls that's really a spy school thing. I adored the writing too. I guess because in a way it reminded me of how I write my reviews and other stuff on here. (Lots of paraenthesis and other little quirks that make writing fun for me) Also it reminded me of Kiersten White's writing in Paranormalcy (which I also LOVED by the way). The same kind of fun and bouncy style. If there's one thing about books that will keep my attention it's that they can actually make me laugh out loud while reading them, and people asking what's funny. The characters were fun too. Another I liked about it was there really wasn't a romantic triangle like most books. It was just the one boy. Which I liked because you could get a feel for a relationship that could have been developed, and not have some girl whining over who she likes better. Hopefully the books stay this way, but who knows since it's only book one.

Cammie (the chameleon) was the MC. She was a sweet (but dangerous) 15 year old ( I think maybe 16. I can't remember) whose mom was the headmistress of the school. When it came to her friends she would do almost anything for them. (Not telling her friend something she found out to keep her from getting hurt, may have seemed mean but it wasn't.)
Bex (Rebecca) was Cammie's in your face kind of friend. Strong-willed and also would fight for her friends.
Liz (elizabeth) was the brainy, always wanting to do extra credit work, and teacher pet type girl. She seemed like maybe more of the innocent, shy girl. (But we know these girls are a deadly force)
Macey was the new girl that came in a little later, and was the prom-type girl only more gothic-y. If that makes sense. Once the other 3 girls got use to her she helped them on their "boy mission" to learn about Josh and see how he reacted to Cammie.
All the teachers seemed fun and at times a little weird, but I guess if you spent all your time in the CIA, FBI, whatever other spy like agency there is you'd be a little nut-so too. The teacher (Professor Smith) that always had a different disguise come a new school was fun because he thought he was being followed. Dr. Fibs wasn't in it much, but from was was told about him he was a genius who could make almost anything. I told you I loved just about every character.

There was one thing that I'm not sure I liked about the book, but I can't say because then it kind of ruins some parts of the book. If you must know though...*Highlight the next few* *There wasn't really a villian that I could tell from the story. Which I guess is fine, but I'm use to all my books having someone be kind of mean. Maybe that was Macey's job before the girls started liking her. Other than that it seemed like at first maybe the boy would be, but turns out he wasn't really. That's all*

QUOTES:
-Oopsy daisy.(Liz)
Sure she knows cuss words in 14 different languages, but when faced with a minor catastrophe Liz says oopsy daisy. (Cammie)
-Is it true he killed a Turkish ambassador with a thong. (Tina)
I wasn't sure if she was talking about the sandals or the panties.(Cammie)
-You girls are pretty smart, but you're also kind of stupid. (Joe Solomon-teacher)
-See you don't even have to answer that, because I know all the trash cans in town, and while this is a very nice trash can, it doesn't look like the kind of trash a girl like you would normally scavange from. (Josh)
I opened my mouth to protest but he went on--(Cammie)
Now, the trash cans on Seventh street, those are some very nice trash cans. (Josh)
-Be sure you write down the steering wheel is round. She seriously had the W H E of wheel in her notebook before she realized I was joking (Cammie)
Cammie don't make fun. (Liz)
-When people like Josh look at you like you're a cross between Charles Manson and Paris Hilton, it hurts a little- even for a spy. (Cammie)
-Did you bake that for me? You shouldn't have? (Dillion)
Josh punched him hard on the shoulder.
-Welcome to the science of garbology. (Joe Solomon)
-Oh no. I think we have a flat. (Madame Dabney)
Oh do we now. Normal friends probably don't go around blowing up Driver's ed cars--well not intentionally anyway. (Cammie)
-Where are we putting paper towels again? (Bex)
Depends. What's on it? (Liz)
Spaghetti Sauce ...I think or blood? (Bex)
So either they love pasta or are a family of axe murders? (Cammie)
-If the communists and the capitalist could fight together to take down the nazis. If spike could fight alongside Buffy to rid the world of demons...if lemon could join forces with lime to create something as delicious and refreshing as sprite, then I surely can work alongside Macey McHenry for the cuase of true love. (Cammie)
-This is it I've killed the only man I could ever love, and now I'm about to hear his deathbed (deathstreet?) confession. (Cammie)