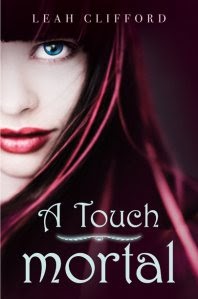 Alright Leah Clifford the author of the beautiful book above--A Touch Mortal. (I love the cover) is having an awesome contest. Her book comes out Tuesday. :) Want to get a little glimpse of it? Read the first 85 pages of A Touch Mortal. She wants to know.... What's the craziest thing you've ever done?

As far as anyone around the blogging community knows it could be anything, but I'll tell you right now I'm far from being or doing crazy, CRAZY things so trying to think of something was hard. The more I thought about it though I realized maybe there is one thing I've done that I normally would have never done had I not been asked by my best friend at the time. Want to know what that is? To bad I'm telling you anyway. I moved out of state with my friend maybe a year or two after graduating high school. Now to some of you that may not seem to crazy, but trust me that's not something I would normally do. I think we wanted to move because both of us were pretty much sick and tired of our families/jobs. (I'm not so much now, but I like to think I've grown a little since then) I lived at home with my Dad. (I can't remember if my crazy step mom still lived there or not at the time) Anyways we packed up my little silver 2 door Hyundai Accent with all our clothes, computer, and that was pretty much it. Trust me my car didn't hold much. I quit my job and we were off. We were officially headed on our way to....wait for it......

Yes we moved to Nebraska. Why? Well because we had a friend that lived there, and that's pretty much the only reason. It was definitely interesting we moved there in July so we didn't have to worry about the snow. On the way there we had some obstacles and by that I mean I got pulled over in Kansas. Yeah. That's definitely an old ticket that I never paid. Shhh! I think it took us 10 hours. We pretty much drove based off a map quest map we printed out. How we actually made it there...I'll never know. We did get turned around in a few places. (Of course somewhere in Kansas. I'm begining to think Kansas didn't like us)

Once we got there we were good. Like I said before we moved up there to live with a friend. Now this friend didn't live in a house. We had 4 people in a one bedroom, one bath apartment, and it was not a big apartment. So naturally my friend and I slept on the couch and an air mattress we bought. We went a few weeks with no jobs, and the only money we had was what we saved from before we moved which was not much. After awhile my friend got a  job at Target, and me well I sucked I couldn't find a job. I couldn't have transferred from my other job because they didn't have a Cvs in Nebraska. As you can imagine with four people in a tiny apartment it didn't take long for us to start getting tired of each other.

Our whole moving out of state only lasted a month. :) So if you think about it. It was more like a really long vacation. Not that Nebraska was fun because it really wasn't. Sorry for the people who live there. I just wasn't a fan. I have to admit though it was somewhat pretty for a place that had rows and rows of cornfields. :) I admit I missed my family and Texas after a month. I'm a whimp when it comes to leaving my family, and now I know. It was a lesson learned.

Ashley
Posted by Ashley @ Bookaholics Anonymous at 1:05 AM

Email ThisBlogThis!Share to TwitterShare to FacebookShare to Pinterest
Labels: randomness