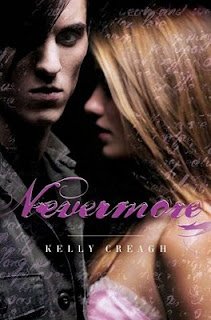 OUTLINE: Cheerleader Isobel Lanley is horrified when she is paired with Varen Nethers for an English project, which is due—so unfair—on the day of the rival game.

Cold and aloof, sardonic and sharp-tongued, Varen makes it clear he’d rather not have anything to do with her either. But when Isobel discovers strange writing in his journal, she can’t help but give this enigmatic boy with the piercing eyes another look.

Soon, Isobel finds herself making excuses to be with Varen. Steadily pulled away from her friends and her possessive boyfriend, Isobel ventures deeper and deeper into the dream world Varen has created through the pages of his notebook, a realm where the terrifying stories of Edgar Allan Poe come to life.

As her world begins to unravel around her, Isobel discovers that dreams, like words, hold more power than she ever imagined, and that the most frightening realities are those of the mind.

Now she must find a way to reach Varen before he is consumed by the shadows of his own nightmares.

His life depends on it.

MY THOUGHTS:
First and foremost, for all you out there that love or hell even like Edgar Allan Poe in any way I recommend reading this book. If you don't know much about him there are references in it.. that help you to understand him better. No need to read a memoir on him because this is more of a fun way. So if you're like me, and don't know a whole lot about him or some of his other works that aren't "The Raven", "The Tell-Tale heart", "Annabell Lee" or a few others then this book helps with that. It goes in to detail about his life. (Not like full on detail, but just enough) This makes me want to go and read some of the books I have about him. I think I have his complete poetry, and another one I bought last year at HPB. Anyways, enough about Poe on to the rest of the review. I told you easily distracted.

I'm not very good at reading almost 600 pages because I'm easily distracted, and want to move on to other things. This is one of those books that was well worth the 543 pages of reading. I honestly didn't want to stop reading it, but after awhile my eyes started hurting so I had to put it down. Just to pick it back up again. :)

Why did I love it you ask besides the above mentioned reasons?

I love how Isobel and Varen's relationship didn't just BAM happen. It took its time, and it developed casually in my opinion. They are complete opposites as well Isobel is the perky cheerleader, with the star football player boyfriend, the popular friends. Even with all that though she seemed different as a character. Like there was more to her. Then you have Varen who is the gothy, mysterious boy who people like to make up rumors/stories about. (Poor guy some of the stuff they say about him. I would have him over Brad anyday. Just saying!) Then you had some of Isobel's popular friends. I'm sorry, but they are not your friends if they treat you that way just because you make a few friends who are different. I ab-so-freakin-lutely hate that. I had that happen to me in middle school I think. I wasn't in the popular crowd, but still same difference. (What does same-difference mean?) Anyway I made friends with certain people, and then a friend I'd been friends with since like 2nd grade stopped talking to me. What the hell is up with that? Granted I occasionally talk to her now. It still was hurtful. I loved Gwen's character as well. She kind of just pops out of nowhere. She's like the odd girl who becomes the one person wo Isbobel could talk to, and who tells you like she sees it. I think there is a little bit of a love triangle in the book with Brad, Varen, and Isobel. Which is fine most books have that. You can already tell whos side I'm on. :) I love me some silent types. I must admit I did get irritated with Reynolds. I'm not sure exactly who he was (maybe I have somewhat of an idea) but he would pop up at the weirdest times, and never fully answer Isobels question she asked. It was always him answering a question with another question, or something that was beyond Isobels understanding. Crazy guy! Yeah so that was my character analysis. :)

Not only did I love the characters, but the storyline itself kept me wanting more. At first it was just about the project, and I think Isobel trying to learn about Varen. Then after awile I think things escalated for her, and weird things start happening to her and around her. Her reality started to become more twisted. Her perception of things became distorted. Was she just dreaming, was it all in her mind, or is it in fact real? One minute she'd be in one place the next she'd be somewhere completely different. Did Varen have something to do with it. What was he hiding in his notebook? I think that's what kept me reading.

I think it wrapped up nicely as well. It's not one of those that leaves you on a complete cliffhanger. Maybe the epilogue at the end did a little. Hum. It would do well in my opinion as one book (although I'm completely looking forward to the second one that's apparently not coming til 2012. Such a long time.)

I've seen somewhere that the bookcover used to be a little different being that Varen had a lip ring. They shouldn't have messed with that. I think it would have made the cover sexier. :)

That is all I think I'm out of words to say for it. It was hard for me to write this. It took what a few days for me to get this out. Hopefully it was worth it, and I helped someone.


This is officially right up there with my VA series. You know if I say that then I must love it. :) I'm definitely going to have to buy me a copy of it since I got it from the library.

-What was this? Parent-daughter conference night? (Isobel)

-Why the snap-crackle-pop didn't you call me back? (Gwen)

-Yeah, well I tried to explain that my mind powers don't work on Tuesdays. (Varen)

-And now your dating a vampire? You know they bite right? (Danny)

-How can he be a vampire when he knows so much about slayers? (Danny)
Danny. (Isobel Mom)
Just saying (Danny)

-Isobel! (Sam-Dad)
Sam, stop yelling at her. (Mom)
If this were in Japanese, it could so be an anime. (Danny)

-We're doing the project on Poe. (Varen)
Hey wasn't that the guy who married his cousins or somethin? (Gwen) (I totally learned something because I had no idea that he actually did when I went to look stuff up about him)
Don't tell me he didn't cause I know he did. (Gwen)
And wasn't he the one who sliced off his ear, and mailed it to his girlfriend? (Gwen)
Van Gogh (Varen)
Van Gogh...Edgar Allan Poe. Close Enough. (Gwen)

-Could she really stop the play herself? Or would she get flattened into cheerleader pizza? (Isobel thinking)

-Honestly, you'd think I was sending you off as a virgin sacrifice. (Gwen)

-Ah, Var-obel. (Mr Swanson) (This just made me laugh because of all the putting names together they actually do in magazines)

-When there is no way, you must make a way (Reynolds)

-But, you have to understand, Isobel, there is always that fine line. Between doing what we want...and doing what we're told. (Pinfeathers) (Very insightful...and then...)
Open this door, and no matter what, you'll never close it. (Pinfeathers)
Kind of like you and your mouth. (Isobel) (You get this a smart ass remark..love it)

Book Review Party by Cym
Posted by Ashley @ Bookaholics Anonymous at 1:34 AM