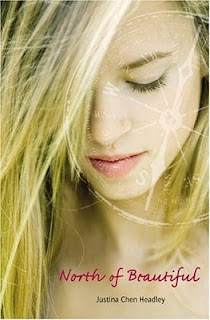 OUTLINE:
She's tall, blond, and has an enviable body. But with one turn of her cheek, all people notice is her unmistakably "flawed" face. Terra secretly plans to leave her stifling small town in the Northwest and escape to an East Coast college, but gets pushed off-course by her controlling father. When an unexpected collision puts Terra directly in Jacob's path, the handsome but quirky Goth boy immediately challenges her assumptions about herself and her life, and she is forced in yet another direction. With her carefully laid plans disrupted, will Terra be able to find her true path?

MY THOUGHTS:
This might not be a long or helpful review, but I'm going to write it anyway. :) The way I see this book is it's about loving yourself (looks and beyond) and being true to who you are. Something I think alot of people have a hard time doing. Whether they want to admit openly or not is a different story. Myself personally I've always had a picture in my mind of how I look, and I don't like it. I've never liked the way I look. I always saw all my others friends growing up, and I still do...as being close to perfect. At least better then me. Is it sad for me to say that? Yes, because I know that no one is perfect, and no one is 100% satisfied with themselves. (or maybe they are. Who knows.)  That is just my way of thinking though. I have low self-esteem and it's something I've learned to deal with.

I loved this book just flat out loved it. I will admit it did take me a bit to get into it which for me is usually the case with most books, unless it's a series I've started and I know something about it.  I love books that are able to teach me something new. Ones that teach me things I didn't know about, or make me want to go google it to find out more. (Yes I said google it! I love google!) What exactly did I google? You'll have to keep reading. :)

It's through the eyes of Terra who was born with a port wine stain on her cheek. So if you saw her on one side she would seem like any other teenager the whole blonde hair, beautiful, and what not. If she turned to her other cheek that's when she would get the stares. The adults who just look and don't say anything, or the children who stare, and ask mommy or daddy what's wrong with that girl? Children are much more outspoken then adults. They say what's on their mind.  That is just one thing about her though. I loved her character so much. In the beginning she wasn't as strong of a character, but she grew into herself. She became strong. That is always a good thing when you can see a character change from beginning to end. She began with a super cute, athletic boyfriend. She was only with him because she was afraid she wouldn't find anyone to like her for her. Don't alot of girls do this same exact thing? She was stuck at home with a mom who coward down to her husband.Two brothers who moved away as soon as possible. (One moved as far away as China) I have to say I hated the dad with a passion. I wanted to hit him. Tell him he was worthless, but then I would have looked stupid yelling at my book.

Then there's Jacob, the Asian goth  kid, who Terra almost ran over. Who like Terra had a few issues. (I won't tell you those) The friendship that grows between them is so cute. He teaches her about geocaching. Which sounds like so much fun to do. He also shows her how to be herself. He seems to know her better then the people she's lived with all her life. I loved Jacob!

So the book was broken up into 3 parts I believe. (Sorry I had to return it to the library so I don't it to look back on) On of the parts was Terra and her mom going to China to visit one of Terra's brothers. I enjoyed this part so much because the author took you on a journey through China, and what it's like over there. You got to see..okay read about some of the well-known structures there like the Great wall  when Terra and her mom on it. Then there was the gardens I believe. (I should have done this while I had the book. Whoops) Then she took you through some of the markets, and what those were like, and then down the regular housing editions. The descriptions were awesome. Then at the end they went to a few other places, and met people who I think also helped Terra to see the beauty in herself.

I enjoyed the end just as much, but that's all you're going to get from me. I've rattle on enough about the book.


QUOTES:
-Wondering is just a breath away from hoping- Terra

-Why would I when I knew how precarious words could be, how betraying they were, how vulnerable they made you. -Terra

-Could you aim your light somewhere else...unless you plan on blinding me too. -Jacob

FAN MADE TRAILER: It's pretty good, and I love some of the quotes that were used. :)