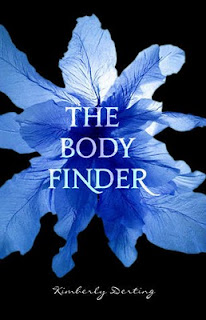 OUTLINE:
Violet Ambrose is grappling with two major issues: Jay Heaton and her morbid secret ability. While the sixteen-year-old is confused by her new feelings for her best friend since childhood, she is more disturbed by her "power" to sense dead bodies—or at least those that have been murdered. Since she was a little girl, she has felt the echoes the dead leave behind in the world . . . and the imprints that attach to their killers.
Violet has never considered her strange talent to be a gift; it mostly just led her to find dead birds her cat left for her. But now that a serial killer is terrorizing her small town, and the echoes of the local girls he's claimed haunt her daily, Violet realizes she might be the only person who can stop him. (Want more of the synposis go to Good Reads)

MY THOUGHTS:
I'm dying to read Desires of the Dead now that I finally got around to reading this one.

I liked how this one wasn't focused on the paranormal creatures like alot are lately. It has a different take on ones "special abilities" I liked the fact that Violet could sense/feel the dead through her sense/taste/smell. It was interesting to read what the "killer's" taste was like to Violet. Then the way each of the dead had a specific sound to them, or as she calls them echoes. The mystery part of the story was the best part of the book--mystery/YA/supernatural=awesomeness! I'm definitely going to look for more mystery YAs.

The author also wrote in short little chapters of what the killer was thinking, and how the killings made him feel. It was like a euphoric feeling to him. I would say something else, but I'll leave it at that. :) I had a fun time trying to guess the killer, and let me tell you I was wrong.

I enjoyed everyone of the characters as well. You know how sometimes you have that one character you kind of hate? Well I didn't really have one of those in the story besides the killer of course.  Violet was an awesome character not to whiney like most. Then Jay, Violets Best Friend, who just happens to be a boy. Hum? He apparently gets hot over the summer break and well I will let your mind wander the rest. Chelsea was funny in a mean way. She had me cracking up. Jules was the anti-girly girl and Claire was pretty much in my view ditzy. Some of the conversations betweeen Claire and Chelsea funny stuff. It's nice when you can have friends that are your complete opposites. (Even though sometimes it doesn't work well it usually is balanced out) Also I liked the whole family dynamic the way her mom and dad were there to support her when something did happen, and to let her know that no matter they were with her. Does the sound right? Her uncle is also in it which I thought was cool because you rarely see other family members and if you do they don't really have a big part.


So basically my likes:
-The short chapters with the killers thoughts
-The fact that Violet could sense/feel the dead through sense/taste/smell
-Both her parents were involved in some way in her life even her uncle was.
-Her friends, Jay, Chelsea, Jules, and Claire.
-The mystery

Dislikes:
-maybe a little slow to begin with but it picked up rather quick
-Don't get me wrong like I said LOVED all the characters, but the stubborn-ness of a few got to me (you'll see what I mean. At least I think you will)

QUOTES:
-  I didn't say I wouldn't skip school. You just have to ask me first. (Jay)
-What are you doing here? (Violet)
I couldn't sleep . What about you? (Jay)
She opted for the obvious and filled her voice with as much sarcasm as she could. I live here actually. (Violet)
Ha-ha smart-ass. I was asking if maybe you couldn't sleep too. (Jay)
-You even use to make up funny stories about those poor little lost creatures of yours. Remember Bob the Squirrel banker who forgot to pay his electric bill and froze to death. (Greg Ambrose-Violets dad)
-For a smart girl, you're a little dense Vi. (Jay)
-Knock it off, you guys. Get a room, for God sakes! (Chelsea)
-I'd offer to take you for a test-drive, but I'm afraid supercop over there would probably Taser me with his stun gun. (Jay) (I think because of taser I completely thought of Paranormalcy)
-I'm just saying, Jules, he'd better watch his back tonight, or I might be trying to take you away from him. -Chelsea loved playing the bi-curious card, even though everyone knew she liked boys far too much to go bat for the other team-(Chelsea)
Gross! (Claire)
Don't worry Claire-Bear. I'm not going to hook up with Jules. I'm much more likely to make a move on you.
Ewww. Get away from me! (Claire)
Leave her alone, Chels, Or you're gonna make her start her It's Adam and Eve and not Adam and Steve speech. And, sorry Claire but none of us want to hear that. (Jules)
-I swear Claire-bear, I am going to call your mom and tell her you need to start riding the short bus. You really need to start practicing your bitchy comments. What are you gonna do when we're not around here to get your back? (Chelsea)
Geez, Chels, I don't even ride the short bus. (Claire)

BOOK TRAILER: I don't know if this was an official one, but I liked it all the same.