Book Review: A Need so Beautiful by Suzanne Young 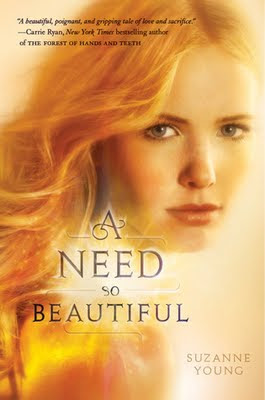 Charlotte’s best friend thinks Charlotte might be psychic. Her boyfriend thinks she’s cheating on him. But Charlotte knows what’s really wrong: She is one of the Forgotten, a kind of angel on earth, who feels the Need—a powerful, uncontrollable draw to help someone, usually a stranger.

But Charlotte never wanted this responsibility. What she wants is to help her best friend, whose life is spiraling out of control. She wants to lie in her boyfriend's arms forever. But as the Need grows stronger, it begins to take a dangerous toll on Charlotte. And who she was, is, and will become--her mark on this earth, her very existence--is in jeopardy of disappearing completely.

Charlotte will be forced to choose: Should she embrace her fate as a Forgotten, a fate that promises to rip her from the lives of those she loves forever? Or is she willing to fight against her destiny--no matter how dark the consequences
MY THOUGHTS:
I don't know what it is with me, but it seems like most books it takes me a bit to get into them, and then when I do get to that spot (where ever that maybe) it's either smooth sailing or a bumpy roller coaster ride. I either end up really loving them, or being a little let down. So where exactly does that leave this one?
I enjoyed the twist on the angel story. It's not the same old fallen angel loves the human, can't leave them bit. Okay, so I've only read a few books that are like that, but you get where I'm going with this right? I mean there's only so much you can do with angels. How can you take something that's been done to death, and shed some new perspective...new light on it? (Pun totally intended) Well just like "A Need so Beautiful" has done.
Charlotte is what someone would call A Forgotten. She's put on the Earth to spread love and the light to people who otherwise would have a dark ending to life. Problem is every time she "saves" someone she loses a part of herself, and at the rate with which the Needs are making her feel she just might be closer to the Light then she thinks. Little by little her family and friends are forgetting her, forgetting memories they once shared. So it's no wonder Charlotte would do whatever it takes to just stay whole. The Lady in black she keeps seeing could possibly help her, but at what cost?
I liked the diversity of the characters in Charlotte's family. Her little brother made me laugh. I'm not sure how I feel about the relationship between Charlotte and her boyfriend though. I mean at times he seemed to genuinely care for her, but then he'd be all suspicious of what was going on. I mean if you care at all then trust her. Oh, and the doctor I wanted to hit him so many times. Just tell her what's going on she's got skin falling off her for crying out loud. Why beat around the bush just say this is what's happening. Easy right? I did feel a little bad for him though after learning who and what he is.
The ending...oh.my.god. I mean I know that this is a series, but I was thinking how can the author make this a series. I got my answer.  I can't wait to read the next book.

Email ThisBlogThis!Share to TwitterShare to FacebookShare to Pinterest
Labels: angels