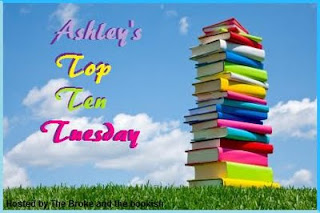 
These are the second books in the series that I've actually read the first book for....
1. A Touch Morbid  (A touch mortal # 2)by Leah Clifford- I wanna know what happens with eden and the men. :)

2. The Golden Lily (bloodlines #2) by Richelle Mead -OMG! I want this book now. I can not wait until next year. I loved Bloodlines. Seriously you have no idea how bad. I have no other reason really.


4. Mirage (Book 2 of the Haven Series) by Kristi Cook- I'm curious to see how it turns out since I only liked Haven some.
5. Outpost (Book 2 in the Enclave or Razorland Series) by Ann Aguirre- I'm excited about this one. I want to see how Duece actually does living above

6. Clockwork Prince by Casandra Clare- I'm totally invested in the characters.
These are the second books to series which I have, but haven't read and still think I want the second book now.
7. Pandemonium by Lauren Oliver
8. Crossed by Ally Condie
9. A Million Suns by Beth Revis
10. Insurgent by Veronica Roth

Posted by Ashley @ Bookaholics Anonymous at 12:28 AM