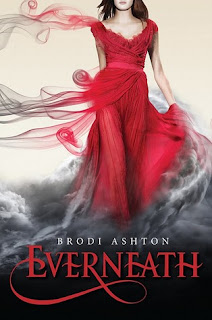 Waiting on Wed
Everneath by Brodi Ashton
Expected Publication: January 3, 2012
Outline:
Last spring, Nikki Beckett vanished, sucked into an underworld known as the Everneath, where immortals Feed on the emotions of despairing humans. Now she's returned- to her old life, her family, her friends- before being banished back to the underworld... this time forever.

She has six months before the Everneath comes to claim her, six months for good-byes she can't find the words for, six months to find redemption, if it exists.

Nikki longs to spend these months reconnecting with her boyfriend, Jack, the one person she loves more than anything. But there's a problem: Cole, the smoldering immortal who first enticed her to the Everneath, has followed Nikki to the mortal world. And he'll do whatever it takes to bring her back- this time as his queen.

As Nikki's time grows short and her relationships begin slipping from her grasp, she's forced to make the hardest decision of her life: find a way to cheat fate and remain on the Surface with Jack or return to the Everneath and become Cole's..
So why am I waiting on this...
1.) I think I'm getting more anxious about this one because people have been getting it the past week or so, and I admit I think I'm a little jealous.


2.) It just sounds like something I would read. I love me some paranormal-ness to books.
3.) I admit it I love the cover. If I didn't know anything about the book I would still want it just because of the pretty-dressified cover, and the swirly smoke that has her all caught up. Oh, we can barely see her face. I'm just intrigued that's all there is to it.