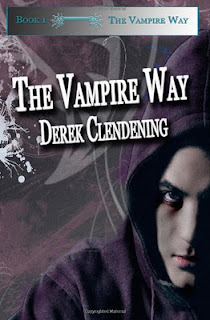 The Vampire Way By Derek Clendening
Genre: Paranormal YA Book
Description: Eighteen year old Rick Thompson is a marked man. When Damien Masonite comes to his school, he knows something is up. And when his friends start falling to vampire attacks, he knows that he and his girlfriend Laura are next. The quest to understand immortality, true love and undying friendship compromise his safety even more. Can he keep his best friends, his true love and keep his mortal life?


(My review will be up soon. I lost my charger for my kindle so it's taken me time to read on my computer. Sorry.)

(MY REVIEW TO COME)
AUTHOR:
Author bio: Derek Clendening lives in Fort Erie, Ontario where he works at the public library. When not writing he enjoys reading and is a die hard football fan (Go Bills!) www.thehorrorofderekclendening.blogspot.com
Posted by Ashley @ Bookaholics Anonymous at 12:00 PM