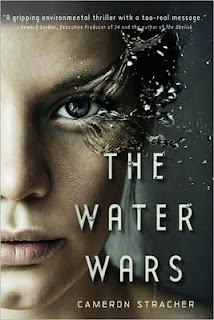 SOURCE: Bought
CHALLENGES: Debut Author
REVIEWED ON: Amazon and Goodreads
OUTLINE:
Welcome to a future where water is more precious than gold or oil-and worth killing for
Vera and her brother, Will, live in the shadow of the Great Panic, in a country that has collapsed from environmental catastrophe. Water is hoarded by governments, rivers are dammed, and clouds are sucked from the sky. But then Vera befriends Kai, who seems to have limitless access to fresh water. When Kai suddenly disappears, Vera and Will set off on a dangerous journey in search of him-pursued by pirates, a paramilitary group, and greedy corporations. Timely and eerily familiar, acclaimed author Cameron Stracher makes a stunning YA debut that's impossible to forget.
MY THOUGHTS:
Tuesday my friend and I were sitting at Braums (a fast food restaurant) and I was sitting there reading the end to this, and when I finished I'm like what if this were to actually happen? She looked at me and said "I don't think you'll have to worry about our generation, maybe our grandkids kids." The point I'm trying to make is that it could happen though right? We could run out of water, or at least it could all be contaminated. The ice caps could melt. Isn't that what the whole global warming thing is? (I'm not much of a political or whatever person.) I guess what I'm trying to say is that in that aspect of the story it's totally plausible. Another thing I like about this story is that (as far as I know) it's not a trilogy or anything like that. It's just the one book, and that seems to be a rare thing. I will say  this even though it's one book it seemed like it could be left open if another decides to emerge.

The ending was in my opinion a little rushed and worked out a little to perfectly. I enjoyed the adventures or misadventures that they had getting to that point though.

As for the characters well sometimes you can connect with them and others times not so much. This is one of those instances where I didn't. It's not that I didn't like them because I did. I just didn't love them. I'd say if we were to meet it would be as acquaintances on a scale of enemies to best friends. Vera definitely was not the whiny type that we usually come across. When she wanted something she did it. She didn't think to much of it. I guess that could have been a good or bad thing depending on the situation. I enjoyed the fact that she was able to go on this journey with someone, her brother Will, when do you ever see the MC take a journey with someone (family none the less). Kai, is the love interest I guess you could say. I wanted to love him honestly, but I couldn't for some reason. I guess maybe because there wasn't enough of him since he disappeared. Later though we find out why he's disappeared, and what use he is to all these people who seem to want him. The water pirates were probably my favorite characters they reminded me so much of the pirates from POTC and the pirates from the movie Stardust. They stole water not to be greedy, but for other reasons which we learn. I <3 the pirates!!!

The only other dystopian I've read about water is Dry Souls which was good. I know there's one called Drought which I have on my shelf so I'll have to read that soon to see if I liked it any better.

It is a short book, and at times entertaining so if you want a short dystopian to read then give this a shot. :)