While I was glancing at my stream of stuff on facebook I came across a post by Katie Alender, where she revealed the cover and title for book 3 in her Bad Girls Don't Die series, and I thought I'm going to have to show this. Usually, I'll wait and put a whole bunch of new pretty just revealed covers together, but this time I couldn't. These covers are always just to pretty to be ignored, and I love the books. Without further ado I give to you..... 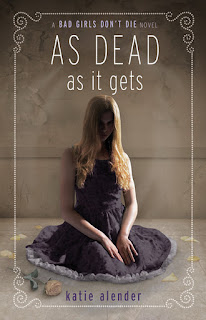 And here’s the description:
It’s been three months since Alexis helplessly witnessed Lydia Small’s violent death, and all she wants is for her life to return to normal.
But normal people don’t see decaying bodies haunting photographs. Normal people don’t have to deal with regular intrusions from Lydia’s angry ghost, sometimes escalating to terrifying attacks.
At first, it seems that Lydia wants revenge on Alexis alone. But a girl from school disappears one night, and Alexis spots one of Lydia’s signature yellow roses lying on the girl’s dresser the next day. Soon, it becomes clear that several of Alexis’s friends are in danger, and that she’s the only person who can save them. But as she tries to intervene, Alexis realizes that her enemy is a much more powerful ghost than she’s ever faced before… and that its fate is tied to hers in ways she couldn’t possibly imagine.
Not even in her worst nightmares.

What do you think? Is it not awesome? I love these covers. They have just about the right amount of creepiness to them. I love how in each one the girls face is a little shadowed. I'm in love. :)
If you haven't read them here's my review for Bad Girls Don't Die let me know what you think. I haven't gotten to From bad to cursed, but it's coming.