"Waiting On" Wednesday is a weekly event, hosted by Jill at Breaking the Spine, that spotlights upcoming releases that we're eagerly anticipating.
So like always I was strolling through the upcoming releases in 2012 on Goodreads, and came upon some awesome sounding books. One that caught my attention was Harbinger. 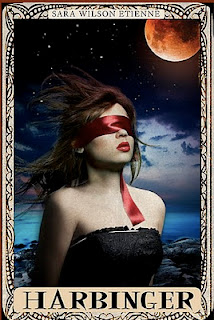 When sixteen-year-old Faye arrives at Holbrook Academy, she doesn’t expect to find herself exactly where she needs to be. After years of strange waking visions and nightmares, her only comfort the bones of dead animals, Faye is afraid she’s going crazy. Fast.

But her first night at Holbrook, she feels strangely connected to the school and the island it sits on, like she’s come home. She’s even made her first real friends, but odd things keep happening to them. Every morning they wake on the floors of their dorm rooms with their hands stained red.

Faye knows she’s the reason, but what does it all mean? The handsome Kel tries to help her unravel the mystery, but Faye is certain she can’t trust him; in fact, he may be trying to kill her—and the rest of the world too.
Expected publication: February 2nd 2012 by Putnam Juvenile


Why did I pick this?
First off look at the cover. Need I say more. Seriously, though it's intriguing. I mean why are her eyes covered with a ribbon? Another reason it deals with an academy/boarding school. I enjoy reading books where the characters are at some creepy-fied school. Then you have the mystery behind what's going on. yep, this is definitely one that I will keep my eye out for. :)

What are you waiting for?
Posted by Ashley @ Bookaholics Anonymous at 11:30 PM