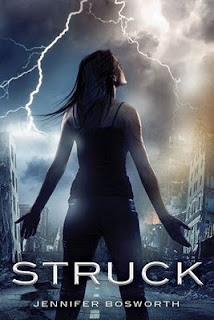 Expected publication: May 8, 2012
Synopsis:
Mia Price is a lightning addict.
She’s been struck so many times she’s lost count. She can’t sleep, she’s covered in veiny red “lightning scars,” and repeated strikes have even stopped her heart on occasion. Still, Mia can’t resist a storm.
That's why Los Angeles, where it never rains, is the perfect place for her to find peace . . . until a massive earthquake devastates the city.
Now Mia finds herself struggling to hold her family together in a strange and terrifying new version of Los Angeles. The beaches have become massive tent cities populated by millions of homeless. Downtown is a wasteland, where a traveling party moves to a different empty building each night, the attendees drawn to the destruction by a magnetic force they cannot deny.
The blind prophet of a doomsday cult called the Church of Light, who predicted the earthquake with frightening accuracy, says a storm is coming to usher in the end of days, and only his Followers will be saved. Mia’s traumatized mom has become obsessed with the Church of Light, while her younger brother Parker is desperate to join a second doomsday cult called the Seekers. But Mia is the one both cults need.
The Seekers are recruiting people with an energy-based power they call the “Spark,” and Mia has it stronger than most. They claim the false prophet of the Church of Light will bring about the end of the world, and they are the only ones who can stand against him.
But without Mia on their side, they will fail.
Mia’s lightning addiction is both the key to saving the world . . . and destroying it.

Why I'm waiting on this...
Okay, first I'm such a cover person, and this cover just screams all sorts of awesomeness. Let's start off with the stormy look. I love storms the rain and lightning. I don't know there's just something beautiful about those two things. I wouldn't want to be hit by lightning, but I love watching it light up a dark sky. ( I even have videos. Sorry not the point) Then you have the girl who we can't really see who's standing in front of a city in destruction. I'm curious to say the lease.
What was your pick?
Posted by Ashley @ Bookaholics Anonymous at 8:34 PM