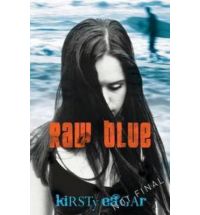 Carly has dropped out of uni to spend her days surfing and her nights working as a cook in a Manly café. Surfing is the one thing she loves doing … and the only thing that helps her stop thinking about what happened two years ago at schoolies week.

And then Carly meets Ryan, a local at the break, fresh out of jail. When Ryan learns the truth, Carly has to decide. Will she let the past bury her? Or can she let go of her anger and shame, and find the courage to be happy?

STARTED: OCTOBER 24,2011
FINISHED: OCTOBER 29,2011
MY THOUGHTS:
So I'm sitting here writing this and my phone goes off and the ringtone is "I need you now" by Lady Antebellum, and for some reason that song reminds me of the book. I rarely associate songs and books together but I don't know maybe, it's the sadness in the song and the alone-ness that Carly feels.

I first heard about this book from Linds at Bibliophile Brouhaha back in December maybe. I can't remember exactly, but I do remember that after I read the synopsis and just the way she raved about it that I wanted to read it. The only problem was I couldn't get it because it's an Australian book. It was out of my hands I had it where it would alert me on Book depository if it ever came in. Still no luck! Then came some giveaways, and me posting crazily on my blog here how I wanted it. See I still have "The Case for Carly" Badge  on the right side. :) This is where my story ends happily because a friend who lives in Australia offered to get me a copy and send it to me! So now I have my very own Raw Blue to gush over, and it's going to make it's way to another friend as soon as I can send it. Now that you have read through my endless chatter on how I came upon the book I bet you're ready for the review huh?


Can I just say I love it a few hundred times and be done? No, you want a little more than that huh? Well, alright going into the story I knew it might be hard to read for a few reasons:
1. The surfing aspect- I absolutely know nothing about surfing except for what I see in the movies, and even then I'm a like huh? Surfing played a very huge part in the book it was one of Carly's escapes from the world. What's weird is even though I was confused with the surf lingo. I loved it. I got to read about something outside my norm. Every time I watch a movie about surfing, (or now read about it) I'm like that would be so much fun to learn to do. I'm know that I would totally suck at it, but the thought of trying something is always fun.
2. The matter for which causes Carly's unhappiness (or a big portion of it)- I figured it would be hard to read about Carly's story. Although it's very limited to what we know, what we do know is she was raped, and she hid that from everyone her friends, family. No one ever knew. Going through it alone must have been hell. I'm not going to pretend I know how it feels, and seeing her emotions towards things I can only guess. It hurt to read it sometimes. I'm the type of person if your hurt or upset or crying. I'm going to feel that too. I know it sounds weird, but I hate seeing people upset. ( I do this with my mom when she's having one of her days. I'm like "Mom, don't cry please because you know I'll be joining you.") I'm a pretty sensitive person.
3. The Australian Lingo- It throws me for a loop sometimes. Even emailing back and forth with a friend of mine I'm like huh? I have to stop and think about it. I think the main one was "How are you going?" When I first read that from Lan (My buddy) I was like umm..oh "How are you doing?" it gets me everytime, but you know I like to see that no one in the worlds alike. I love learning things about Australia that I would have probably never learned otherwise. I'll occasionally say it to someone, and they look at me strange. It's fun.

Now that I completely went away from my normal reviewing ways I'll try to get back on track.
I love the writing. I think Kirsty Eagar has a unique way of telling a story that makes you fall for the characters whether their good or bad. I know I did. I fell very hard for them. Carly, Ryan, Kylie, Danny, Hannah, and the others but these are the ones I loved to read about the most.

Carly would definitely rank on the enemies to best friends scale, a very close friend. That is if I were able to get close enough to her. She's a very guarded person. Who would blame her for what's happened. I wanted Carly to be happy. It's funny how some characters you can pretty much relate to, and some you can't. I'm not saying that I can relate to her because of what happened, but just for the fact that she feels alone in the world. That when you try and talk to people they nod and agree (or give crappy remarks) but most the time they don't really hear you. So why bother? It's easier to just close yourself off, and be in that safe little bubble you've made for yourself rather than having everything criticized and exposed. Despite everything Carly has gone through she genuinely cares for the people around her. We see later on that she slowly opens herself up a little more to a few people, Ryan a surfer who just got out of prison, Danny, a kid who has a "gift" for seeing peoples colours, and of course Hannah who lives above her.


Danny is a kid that Carly meets one day out on the waves, and from then on a friendship blossoms. I loved Danny's character because he didn't care what others thought of him. When the surf dudes messed with him saying that they shouldn't be on the water or the breaks because  children and girls don't belong. He simply responded with "It's our break too."


Ryan, I knew I would enjoy his characters as soon as he collided with Carly in the water. He's not one of these perfect guys we tend to see in stories. He's a very flawed character. The thing is he learns from his mistakes at one time maybe he wasn't the person who he should have been, but he becomes more then just another criminal. He seems to care about Carly when he learns more about her. He wants to help her, and be there for her. Oh, and the insta-love never happened. Their fondness for each grew with time. None of the I love you. You are my one crap that happens the day they meet. Score.


I will say this I wanted things to happen. I got mad at the characters when stuff didn't, and the I was happy when stuff did. It was definitely one hell of a rollercoaster ride.


So yeah that's pretty much it, and if you stuck with me this long. YOU are awesome. :)

QUOTES
-Sometimes staying in bed isn't as scary as getting out of it- Carly ( I feel this way sometimes. Sometimes you're like why bother getting out when nothing bad can happen if you just lay there.)
-Why do they put mate on the end of every sentence? Is it to let the other know the transmission is finished, like over on a two way radio.-Carly
-Knowing that your voice can mean so much to one person.
SOME INTERESTING RAW BLUE STUFF
Interview with Kirsty Eagar at Bibliophile Brouhaha

Posted by Ashley @ Bookaholics Anonymous at 12:23 AM