Sorry about the music I was in a Linkin Park mood.

Review:
The Guardian by Sherrilyn Kenyon (Thanks Macmillian)

Won:
Glow by Amy Kathleen Ryan (Won From Anna at Irish Banana Reviews)
Eyes like Mirrors by Julia Mayer (Won from Hannah at Literary Explorations)
Anna and the French Kiss by Stephanie Perkins (Won from Jen at Almost Grown Up Sorry I totally said all grown up on my video)
Anna Dressed in Blood by Kendare Blake (Won from Rachel at Paper Cuts)

Swag:
A Handful of Post Cards of Hunted from D.J DeSmyter

Bought:
How to save a life by Sarah Zarr
Defiance by Lili St Crow
In the forests of the night by Kersten Hamilton
The Future of Us by Jay Asher and Carolyn Mackler
Scored by Lauren Mclaughlin
Fire by Kristin Cashore 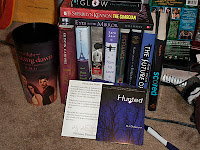 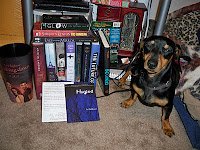 Another thing I was going to send out Shades of Gray to somebody for RAK because I noticed it was on their wishlist and I forgot to write it down. So I have a copy of that for anyone who reads this and lives in the US and wants to read the book or has it on the RAK wishlist. First come though. :) 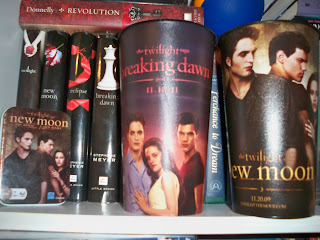 P.s- Oh, and I went to the movies tonight with a guy from work. (This sounds like it doesn't matter, but trust me it was a BIG deal for me. I rarely if at all go out with anyone. I'm a little anti-social.) Anyways, they had Breaking Dawn cups as the large drinks (See picture above. The New Moon was from when that movie came out) and I was like OMG. (I didn't say it but I was thinking it) He knew that I liked Twilight because my co-workers and I keep talking about going to the marathon Thursday. So he ended up getting the drinks (I'm sure he was thirsty too)  So I got a cup. Actually two cups because he's like if you want mine you can have it also. Then when he dropped me off, and I forgot the other one he txt me and is like I forgot to give you mine. Aww! Okay I'm done.

Posted by Ashley @ Bookaholics Anonymous at 3:29 AM