"Waiting On" Wednesday is a weekly event, hosted at Breaking the spine, that spotlights upcoming releases that we're eagerly anticipating.

Okay, so I'm trying to stay with the theme of contemporary Month. My pick this week I is Don't breathe a word. 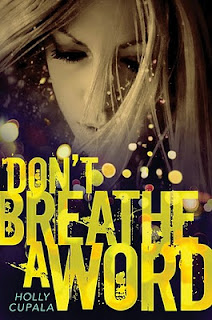 From asthma, which has nearly claimed her life. From her parents, who will do anything to keep that from happening. From dangerous Asher, who is smothering her from the inside out.

Joy can take her cruel words until the night they go too far.

Now, Joy will leave everything behind to find the one who has offered his help, a homeless boy called Creed. She will become someone else. She will learn to survive. She will breathe…if only she can get to Creed before it’s too late.

Set against the gritty backdrop of Seattle’s streets and a cast of characters with secrets of their own, Holly Cupala’s powerful new novel explores the hurt of bullying, the meaning of family, and how far a girl will go to discover her own strength.

Why I chose it:
I really don't know it just sounds intriguing and it sounds like it could make you stop and think. I know I usually have better reasons why, but sometimes you don't have reasons. It's just that it has that something that catches your attention. I haven't read anything by this author yet, but I do have a few books.

Posted by Ashley @ Bookaholics Anonymous at 1:32 AM