Waiting on Wed: Something strange and deadly by Susan Dennard

Waiting on Wed is host by Jill over at Breaking the spine. I have fun time doing this because I always end up finding some awesome books I've never heard of while I'm looking through other peoples WoWs and when I'm trying to find one that I would want to feature. My Pick this week is...

Something Strange and Deadly by Susan Dennard
Expected Publication: July 24, 2012 from HarperTeen

Outline:
There’s something strange and deadly loose in Philadelphia…

Eleanor Fitt has a lot to worry about. Her brother has gone missing, her family has fallen on hard times, and her mother is determined to marry her off to any rich young man who walks by. But this is nothing compared to what she’s just read in the newspaper—

The Dead are rising in Philadelphia.

And then, in a frightening attack, a zombie delivers a letter to Eleanor…from her brother.

Whoever is controlling the Dead army has taken her brother as well. If Eleanor is going to find him, she’ll have to venture into the lab of the notorious Spirit-Hunters, who protect the city from supernatural forces. But as Eleanor spends more time with the Spirit-Hunters, including their maddeningly stubborn yet handsome inventor, Daniel, the situation becomes dire. And now, not only is her reputation on the line, but her very life may hang in the balance.

Why I chose it:
Did you see the cover? If that isn't enough reason it seems like it has a little bit of everything in it paranormal, some steampunk, historical, and more. 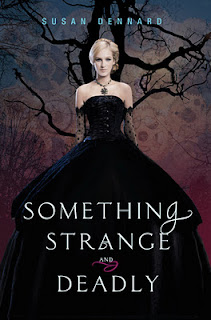 Email ThisBlogThis!Share to TwitterShare to FacebookShare to Pinterest
Labels: harperteen, waiting on wed