Waiting on Wed: Shadows Cast by Stars by Catherine Knutsson

So check it Waiting on Wed was created by Jill over at Breaking the Spine
as a way for us to show upcoming books that we're eagerly anticipating. 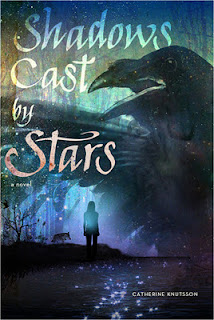 This week my pick is Shadows Cast by Stars by Catherine Knutsson
Expected publication: June 5th 2012 by Atheneum
Two hundred years from now, blood has become the most valuable commodity on the planet - especially the blood of aboriginal peoples, for it contains antibodies that protect them from the plague that is ravaging the rest of the world.

Sixteen-year-old Cassandra Mercredi might be immune to the plague, but that doesn't mean she's safe. Government forces are searching for those of aboriginal heritage to harvest their blood. When a search threatens Cass and her family, they flee to the Island, a mysterious and idyllic territory protected by the Band, a group of guerilla warriors, and by an enigmatic energy barrier that keeps outsiders out and the spirit world in. And though the village healer has taken Cass under her wing, and the tribal leader's son into his heart, the spirit world is angry, and it has chosen Cass to be its voice and instrument...
Why did I choose this one?
This seems like it just has all sorts of genres mixed into one. Dystopian, fantasy, paranormal, ghosts. I'm all about a mixed genre books. :) Even the cover looks like it has a little bit of everything in it. I love the colors. Yeah, that's pretty much all I gotta say.

What did you pick this week?