Book Review: The Dead and Buried by Kim Harrington 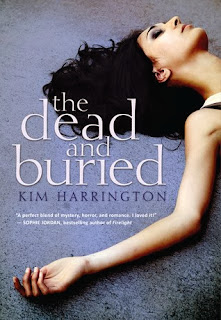 AUTHOR: Kim Harrington
PUBLISHER: Scholastic Point
PAGES: 295
SERIES/STAND ALONE: Stand Alone
SOURCE: Bought
OUTLINE: Jade loves the house she's just moved into with her family. She doesn't even mind being the new girl at the high school: It's a fresh start, and there's that one guy with the dreamy blue eyes. . . . But then things begin happening. Strange, otherworldly things. Jade's little brother claims to see a glimmering girl in his room. Jade's jewelry gets moved around, as if by an invisible hand. Kids at school whisper behind her back like they know something she doesn't. Soon, Jade must face an impossible fact: that her perfect house is haunted. Haunted by a ghost who's seeking not just vengeance, but the truth. The ghost of a girl who ruled Jade's school — until her untimely death last year. It's up to Jade to put the pieces together before her own life is at stake. As Jade investigates the mystery, she discovers that her new friends in town have more than a few deep, dark secrets. But is one of them a murderer?


MY THOUGHTS
First off, I have to say I need to read Kim Harrington's debut book Clarity and  the sequel Perception. I'm all about the ghost and the powers one can have. So with that being said it's no wonder that I enjoyed The Dead and Buried. Throw in a vengeful ghost and a little mystery as to who killed her and why and BOOM you have a story. I'm sure it's been done before, but it's the way the author writes it.


"I think people, by nature, want to believe that there's good in everyone. That if you peel back the layers of the onion you'll find and explanation, an excuse, a justification. The bully is bullied by his own father. The bad girl is ignored by her parents and just wants attention, even if it's negative." -pg 190

The characters have to be enjoyable, the plot has to make since and come together nicely. You know all that stuff. :)  I believe that Kim Harrington did a nice job of that. Even though in the back of my mind and about 60-70 pages in I had this feeling who the killer already was, but there were times I was skeptical. Needless to say I was right about the killer. It didn't change the feelings I had for the book.