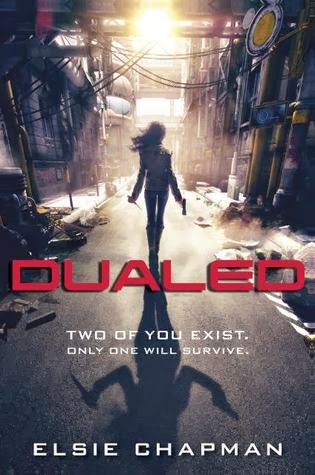 AUTHOR: Elsie Chapman
PUBLISHER: Random House
PAGES: 292
SERIES/STAND ALONE: Series
SOURCE: Bought
OUTLINE: In the city of Kersh, everyone must eliminate their genetic Alternate twin, raised by another family, before their twentieth birthday. West Grayer, 15, has trained as a fighter, and has one month to hunt and kill her Alt. A tragic misstep shakes her confidence. Guilty, grieving, she feels unworthy, runs from her Alt and from love - both can destroy her.

MY THOUGHTS
Guys, I'm so proud to say that this one didn't have that love triangle, or insta love at all. Actually it barely had any mushy romance at all. The parts that were there weren't just thrown together over night. They grew up together, they knew each other from the begining. There were times when the reader could tell that maybe something would end up happening, but not right away. My thoughts would be after reading the synopsis for Divided that it'll come. I'm just thankful that Ms. Chapman decided to actually have the story be THE story. YEA! It took me awhile to realize that I would end up really enjoying the story, but I was sad to see that one character had to die so early on. :(

I think that if there was anything about Dualed I would have to complain about is The Board, or the government that's in place.  I get that they have to kill the ALT to see which is worth living so they can be used in a war that may or may not come. My thinking here is why are you making almost identical people to begin with? Why not just train those that are born like you're already doing. Why are you wasting whatever energy and time training two of the same? Is this just me, or does anyone else who's read the book feel the same way?

I always find it interesting when the author puts in a little bit about the library or books that are in this future. In Kersh this is what West says about it.

"Most people don't touch paper books---not when stores stock flexi-readers that can bend without breaking and fold down to the size of your palm. Besides, paperbooks smell like the past, an alien world." -pg 35

I think flexi-readers sound pretty cool, but I think I would still miss the actual book.

Then in another paragraph it reminds me of how this book could be like the Hunger Games.


"Revival of the gladiator games. Sure it talks a bit about how they did it back then, when people were pitted against each other for sport and glory. But quick enough it goes on abut how the board has brought those games back to life on a whole new scale. No puny stadium here; Instead we get a battlefield as big as this city. How the Board decided it must be children that do this, so we can flush out the weak before they grow up and waste our resources and time."-pg 39

It also states exactly what I was questioning above about the ALTS. Even with me questioning this like I said I still enjoyed the book.

The characters were also very enjoyable. There were times when I thought West was being a little selfish, but with everything that had happened to her I guess she had the right to be. She has one person in her life, but kept pushing them away for fear (I guess) of being hurt. When she finally let her guard down and accepted the help that's when things started to happen. That's when she became that strong person because she knew the consequences of staying in the shadows. I figured it would of happened sooner because of what she became, but better late then never right? Everyone has their bad moments when they feel alone in the world.


"I wonder when my heart will stop hurting with each punishing beat. When my lungs will start taking a full breath again, so I won't feel like I am drowning anymore." -pg 43

I loved Chord to pieces he was one of those guys that would do anything for the people he cared about and he showed that over and over again.

I would have to say I was overall pleased with the story. :) I'm interested to see where it will go.