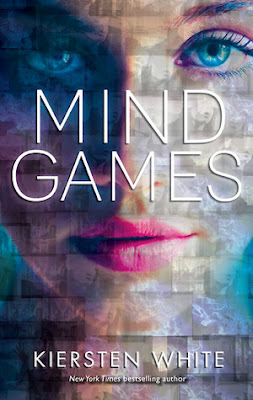 Fia was born with flawless instincts. Her first impulse, her gut feeling, is always exactly right. Her sister, Annie, is blind to the world around her—except when her mind is gripped by strange visions of the future.
Trapped in a school that uses girls with extraordinary powers as tools for corporate espionage, Annie and Fia are forced to choose over and over between using their abilities in twisted, unthinkable ways…or risking each other’s lives by refusing to obey.

MY THOUGHTS:
I wanted, wanted, wanted to love this book so much because it had all the aspects I love in a book the spies, powers, and academies. Somewhere along the line it fell short for me. Maybe, it was that I'd felt like I had experienced this plot before. Push the movie anyone? Seers, readers, companies wanting to use people and their abilities? I understand that it's going to be done over and over again, but if that is the case give it some little thing that's going to make it stand out. Make me want to feel for the characters that are in these horrible circumstances. Where I loved Evie and pretty much every character in the Paranormalcy series, I couldn't bring myself to love these characters. They had this co-dependency on each other. Annie needed Sofia to stay at the school, Sofia needed Annie to keep her from falling deeper into her thoughts, it just kept going. I didn't care much for Eden when she did show up. It felt like James was pretty much using all the girls. There just wasn't a character I cared for until the very, very end.

The flipping back and forth between Fia and Annie and past and present with each chapter hurt my head a little. I mean having to remember what was going on 2 or 3 chapters back to understand the chapter I was reading. It just didn't work well for me. (Now this just sounds confusing)

The only thing that saved this book from its death with me was the twist at the end. What an end! It'll keep me reading the series to see what happens.

This was definitely not the Paranormalcy Series. Anyone who says other wise is a liar. I'm hoping that maybe it's just a first book thing for this series, and that Perfect Lies, the second book, will recover from the wounds that were Mind games.

QUOTES
"Instead I think about everything in the whole entire world that makes me angry--there is a lot, oh, there is a lot---and I start singing Justin Bieber at the top of my lungs." pg 43