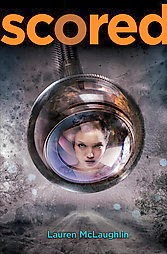 AUTHOR: Lauren McLaughlin
PUBLISHER:  Random House Children
PAGES: 234
STAND ALONE/SERIES: Stand Alone
SOURCE: Bought
OUTLINE:
Set in the future when teenagers are monitored via camera and their recorded actions and confessions plugged into a computer program that determines their ability to succeed. All kids given a "score" that determines their future potential. This score has the ability to get kids into colleges, grant scholarships, or destroy all hope for the above.Scored's reluctant heroine is Imani, a girl whose high score is brought down when her best friend's score plummets. Where do you draw the line between doing what feels morally right and what can mean your future? Friendship, romance, loyalty, family, human connection and human value: all are questioned in this fresh and compelling dystopian novel set in the scarily forseeable future.

As much as I use to hate Dystopian books when I started reading YA awhile back now I can't get enough of them. It seems like lately that's what interests me. Maybe, I'm just burned out with paranormal right now. You know us readers can be a fickle person. :)

I started reading Scored back when I was more into the paranormal books so I only got 30 pages in and gave up. It honestly didn't seem like it was going anywhere. Now go back a couple of days from today and I picked it up again to see what I thought. I really enjoyed it.

The concept really doesn't seem to far off from something that's possible. I'm talking way, WAY in the future, but still. Technology has come so far from what is use to be that microchips and the government using technology to keep up with us and watch us isn't so unbelievable.

Characters
Imani is the MC in Scored and like all dystopians MCs she believed in what her government was doing. So when one of her teachers assigns the class a writing project to go against what you believe (so if you were unscored you would say why the score system works and vice versa) she had a hard time with it, but she also found her self working with Diego an unscored later on going against everything she believed. We all know what happens in these kind of situations.

I believe as the story went on, and Imani spent more time with Diego she learned that not everything is always black and white, governments don't always have the people best interests at heart. Sometimes you have to go against what you believe in order to find who you really are. I love characters who learn things and grow.

Diego was absolutely adorable as well, and if I was scored I would have found a way to see him too. He started off as a conceded know it all, but I think he just had strong beliefs that being scored was crap (my words totally).

In the end I really enjoyed the book like I said and kind of hoped that it would have a second one, but I don't think that will happen.