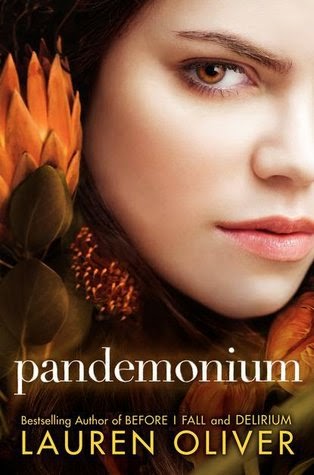 Unlike Delirium, Pandemonium is told in two perspectives. There's a then and now. I want to say I haven't read a book with that P.O.V but I probably have. At first I thought it would bother me, but as the chapters went on I grew to enjoy them more and more. Just like Delirium it was still too slow paced for my liking, but when you have a good story and characters you love to read about it can be overlooked.

From kidnapping, falling for someone, death to escaping, a ratman, shock, and life Pandemonium definitely has a bit of it all.

POVs
Then: starts almost where Delirium left off with Lena running, and it takes us through her time beyond the compounds that were once her life. She is now living with the "invalids" in their little homestead. This is where we get to meet a whole new set of characters. These chapter show how they all work together to survive, and when it's time to move from one place to another.

Now: Lena is now sucked back into the world of the cure (She is after all part of a rebellion). She gets the job of watching Julian the son of Thomas Fineman, the founder of the DFA. When things go down at the rally it's up to Lena to figure it out.

CHARACTERS
Lena was back (duh) and I definitely think she has grown up so much from Delirium. She realizes now that what she believed in was only a twisted view of her government. I loved being able to see her be this tough woman in the "Now" chapters trying to save herself and others

Raven wasn't one of my favorite characters. I always thought that she had something she was hiding. I need to get the book that has her short story in it as well as Lenas mothers.

Julian is the son of the founder of the DFA (Deliria Free America) and is set to have his cure done in front of thousands, but on the day of the rally shit goes down and he ends up underground with Lena. I don't know how I feel about Julian at the moment. I'm still wanting Alex I think. Julian starts off believing everything he's told just like Lena was. He's a pretty big baby if you ask me, but as the story goes on I think he begins to understand that he's been told lie after lie. I wanna say he begins to man up a little, but I don't know. Like I said I'm still on the A Train. (Ha A train get it? Alex Train. Yeah I know.)

ENDING
I can't decide if I want to throw this book like I wanted to with it's first one, or if I want to hug it, love it, and be all giddy. If you've read the books then hopefully you understand what I mean, and if not this is my second attempt to tell you that you need to read it. Don't be like I was and think "Oh, I'll get to it at some point" make it the point to read now. Okay? Okay!