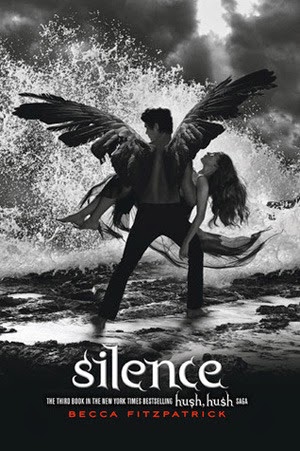 Nora Grey can't remember the past five months of her life. After the initial shock of waking up in a cemetery and being told that she has been missing for weeks - with no one knowing where she was or who she was with - she tried to get her life back on track. Go to school, hang out with her best friend, Vee, and dodge mom's creepy new boyfriend.

But there is this voice in the back of her head, an idea that she can almost reach out and touch. Visions of angel wings and unearthly creatures that have nothing to do with the life she knows.

And this unshakable feeling that a part of her is missing.

Then Nora crosses paths with a sexy stranger, whom she feels a mesmerizing connection to. He seems to hold all the answers...and her heart. Every minute she spends with him grows more and more intense until she realizes she could be falling in love. Again
MY THOUGHTS

Quick Thought
This was probably the least favorite book of mine out of the series so far. I just couldn't get into it like I had with the first two books. I don't know if it had to do with Nora and her memory loss or what but yeah not the favorite. In other thoughts, I see why it was titled Silence. #silenceikeelu (Yes that was Achmed the dead terrorist. Jeff Dunham anybody?)


What is with me and these slow paced books recently, you would think I'd learn or something. Unlike, most people I see that DNF books I can't give up after 50 pages if I'm bored. Hell I can't give up after 100 pages. I just keep on trucking, and hope to the heavens that it'll get interesting. I guess eventually it did because we finally get to learn who this black hand is (unless we learned in book 2 but I don't think we did), who Jev is (which by the way I totally had it figured out from the beginning.) but other than those there wasn't a moment where I was like "this is what I've been waiting...this is why I kept reading" it was more of a "I started the series and I want to finish it plus there is one more book" type thing. Is that horrible to say?

I wasn't really a Nora fan in this book because she seemed helpless, and granted she had a reason to be (read on) don't let these people push you around like some kind of merry go round. I guess I also kind of felt bad for Nora after having to go through what she went through, and then have pretty much everyone she loved and trusted lie to her about what actually happened. I get they wanted to protect her from the angel formerly known as Patch, but still it's her life shouldn't she know about it. Stop trying to kick her when she's already down. Pick her up and make her that strong Nora we know. #itsmylifeandillknowifiwantto
I'm a little disappointed in Vee, Nora's best friend, she's suppose to be one of those people who don't lie to her. Who tell her like it is. I know from reading the other books that Vee was like that. Even the author said people hated Vee's character because she was blunt  (If I'm not mistaken) and publishers didn't like her. (Becca Fitzpatrick signing. I got this from youtube, and it's not mine.) but I loved in Hush, Hush and Crescendo so seeing her this way was a little bit of a let down. :(  #willtherealveepleasestandup

FYI: This paragraph will give away info you may not want until you read this book.
Okay, so had I not figured out who Jev was in the book I was going to be unhappy for awhile, but I think in the back of my mind and in my gut I knew who he was. Let's say I'm glad I was right. His interactions with Nora, and the way he talked to her despite being a complete butthead sometimes I knew. He would never have let anything happen to her. Well besides the amnesia thing. I think that was him again trying to protect her from what he saw as a threat. Patch will always be Patch to me. I'm not a fan of him changing his name to Jev. It's undeniable that Nora and Patch are meant to be. #Notchforeva I love doing that.


This was actually an ending I could deal with, but sadly (or happily however you want to see it) there is one more book, and I'm hoping it will be satisfying like this, okay well maybe not full on like it. You get the picture. So yes, in the beginning I thought the story was slow, but the ending brought it up. #anendingicouldendwith