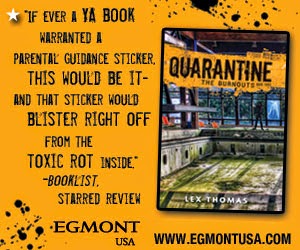 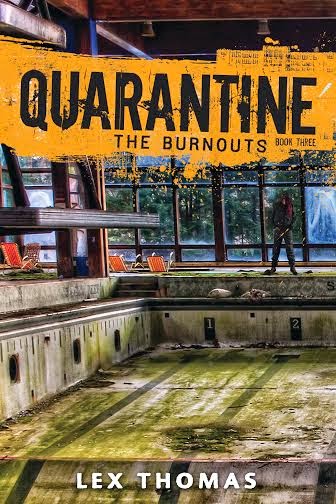 
OUTLINE:
Lord of the Flies in a 21st-century high school setting.Welcome to Quarantine 3: The Burnouts , where readers of The Maze Runner, Gone, and Divergent go when they're hungry for more dark, compelling survival stories.
When an explosion rocks David and Will's suburban high school one morning, a deadly virus is unleashed on the school. After a year of quarantine, with no adults around, the students have created their own society. All of the social cliques have developed into gangs-The Nerds, The Geeks, The Freaks, The Sluts, The Skaters, The Burnouts, The Pretty Ones, and The Varsity-and each gang provides a service with which they can barter for provisions. Without a gang, it's almost impossible to secure food, water, territory, or supplies. In the final installment in the Quarantine trilogy, the brothers are reunited on the Outside and it appears as if, for once everything is going right. But inside the school, Lucy is alone with no gang and no hope, until the Burnouts welcome her into their filthy arms.

One of the greatest gifts you can receive as a writer is the certainty of how your story will end. It can come on in a flash, as suddenly as the initial story concept. Or maybe, if you’re truly blessed, your vision of the ending is how the whole idea began. All you have to do is backtrack to deliver a story worthy of that whopper of an ending. But those are the rarer cases.
What often happens is you take your best guess at what the ending will be when you’re drawing up an outline. Then, you hope that it still fits by the time you get to it. But the closer you get to it, the more the ending can feel frightening. It’s like a mugger, stalking you from the other side of the street. You know you’re going to have to face him eventually, and you pray you’ve got the moves to beat him. When it’s a whole trilogy you have to conclude, it can feel like you’re facing off with a street gang. And there’s an audience watching from the windows of neighboring buildings.
When you’re in the business of writing sequels, anticipation builds between books. Readers have expectations, and they’re not shy about letting you know. They have assumptions of how the trilogy will go. That awareness of what fans want can feel empowering, or stifling, depending on how your book is shaping up at the time. So, what do you do? Do you bend to expectations? Or do you shut the world out? I recommend a little of both. Bend to your expectations if you were a fan, and shut the world out until you nail exactly what that is.
In the case of QUARANTINE, we looked to what we’d already written to solve the riddle of the ending. What we discovered was that the story had its own demands. Once we discovered what they were, we achieved an inner-peace. We realized that it could only end one way.
What were these mysterious demands, you may wonder? Well, for starters, we’d already made story choices that had narrowed down what the ending would have to be. Events that had occurred in Book 2, THE SAINTS, made certain things impossible in Book 3. Simultaneously, those same events illuminated new, exciting possibilities we’d never imagined at the inception of the series. Then, there was the demand of character. Given where our main characters had found themselves at the end of THE SAINTS, we had to honor their emotional state and what we believed they might do next in order to make things better. But the most important demand of all was that we honor the “rules” of QUARANTINE.
Early on, before we’d even written Book 1, THE LONERS, we’d decided on certain guiding principles to help keep our story clear (and unified, as a co-authored joint). And then there were principles that had revealed themselves to us by the time we’d finished THE SAINTS. While writing Book 3, we’d frequently refer back to them. Here are a few:
- Quarantine is a thrill-ride. It’s meant to scare you and hopefully entertain you, but never slow down. Our goal is to make the reader feel like the characters feel — that you are not in control of your fate, no matter how much you wish the opposite were true.
- Quarantine is about survival. The world is merciless. Reality is not kind or forgiving. Kindness and forgiveness are human choices, ones that don’t guarantee survival.
- Quarantine has always been about defying expectation. If we ever felt we were settling into “trilogy” or “saga” cliche, we moved (ran, kicked, punched) in another direction. In a way, it’s always felt like an anti-trilogy. No chosen one. No superpowers. No grand conspiracy. And definitely no TV ending, where every character gets their moment to wave goodbye to the camera.
- The first two Quarantine books are distinct from each other. They are two different styles of stories, and  we wanted the same to be true of the third. We wanted Book 3 to be an experience that was unlike the other two, but just as wild.
Put all of those factors in a pot, stir them up, and what you get is THE BURNOUTS. Guaranteed to make fans cheer and make them curse, but no matter what they feel, it’s going to be passionate.

Posted by Ashley @ Bookaholics Anonymous at 8:00 AM