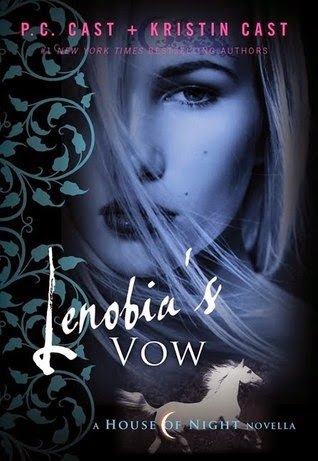 Outline:
The second of the House of Night Novellas brings us Lenobia, the strong, beautiful horseback riding instructor, who guides Zoey through some of her darkest hours, and has a dark secret buried in her own past...
In a small southern town at the turn of the century, young Lenobia is developing into a beautiful young woman with ideas of her own. But when she is Marked as a fledgling vampyre, her world turns upside down, and she is drawn to the musical streets of New Orleans. There, she learns of the city’s dark underbelly, ruled by powerful black magic. As Lenobia experiences her first love – and loss – and discovers a passion for horses to sustain her, she must come face-to-face with Darkness itself. And she may not escape without scars.

Quick Thought (or not)
I haven't read a House of Night book in a long while. I don't know if it's because I was just "burned" out on them, or if I thought they just started getting ridiculous. There are 12 books so it's bound to get tiresome after awhile. After reading Lenobia's Vow though I can see why I started the series. It's hard not to fall in love with some of the characters, and with the world that was created around the Vampyres and the House of Night.

Pacing
This is a novella so with that in mind it was really good. We got to start off with Lenobia where she was born and raised and see who she was before being Zoey's horse instructor. We get to see her leave home to embark on a journey to the New World. Through the journey though things happen, and it takes it slow that way we can watch,learn, and grow with her.

Characters
Since this was a novella featuring Lenobia there aren't many other characters to talk about, but I will name a few.
Being as it is Lenobia's Vow we will start with her. As stated above I haven't read the HoN books in awhile, and I really only got around to reading up to the 7th book. I don't remember too much about Lenobia, but from reading her story she's a very strong, caring woman who would do anything for those she cares about (especially the horses)
Martin was a worker on the ship who cared for the horses, and of course meets Lenobia and from there I'm sure you can guess what happens. I really enjoyed Martin. He didn't treat Lenobia any different when secrets were shared. He told her stories of the new world where woman could be free to marry and love whoever they wanted.
Sister Marie Madeliene was the Nun who was with the girls taking them to the new world to meet their husbands. When things went awry on the ship it was Sister Marie who stood beside Lenobia, and kept her safe from those who wished to harm her.

Ending
This isn't one of those type Novellas where you have to read other books before it to understand. It might help you understand what happens at the end though. :) It really is just a story about a bastard daughter  (the books words not mine) making a new life for herself. I will say what happened at then end sucks, and I wish it could have been different, but it defines who a person is.

Posted by Ashley @ Bookaholics Anonymous at 12:06 AM