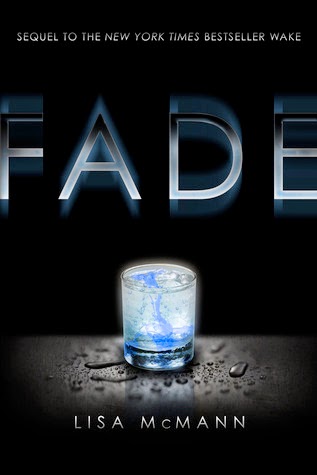 Outline:For Janie and Cabel, real life is getting tougher than the dreams. They're just trying to carve out a little (secret) time together, but no such luck.
Disturbing things are happening at Fieldridge High, yet nobody's talking. When Janie taps into a classmate's violent nightmares, the case finally breaks open -- but nothing goes as planned. Not even close. Janie's in way over her head, and Cabe's shocking behavior has grave consequences for them both.
Worse yet, Janie learns the truth about herself and her ability -- and it's bleak. Seriously, brutally bleak. Not only is her fate as a dream catcher sealed, but what's to come is way darker than she'd feared....

Quick Thought (or not)
I finally got around to reading the second book in the wake trilogy by Lisa McMann, and to say I'm glad that I read it would be a lie. I really, really wanted to enjoy it. I think I had pretty much the same problems with Fade as I did with it's 1st book, Wake.

Pacing
It was slow, and the build up to the major event in the book didn't really do anything for me. I was looking for some shit to go down, and I know it's a YA book so maybe that's why.

Characters
I thought by reading Fade I would grow to like Janie more as a character, but it just proved that sometimes characters don't really change. Their situations may change a bit, but the personality will always be there. Did I care what happened to Janie? Of course I did I would sound like a cold hearted bitch if I were to say I didn't care what happened at that party, but then again Janie put her own self in the position. If you know you're going somewhere that's putting you in a situation where things could get bad be smart about it.

Cabel was the one character I enjoyed in Wake, and I still enjoyed him in this book. While I think he was being a D-bag when Janie wanted to continue on with the case I could understand his point of view as well.

Ending
The ending was definitely the part that I had the most love for, although learning more about what dream catching will do to the person was hard I believe it added to the story.

Overall
I just think it gave away to much in the beginning for me to keep my anticipation up. I'm sure you're wondering why I even finished it if I had such a problem with it right?   I have to finish series. It's one of those pesky reader habits of mine. I'm going to end up reading Gone as well. Maybe, just maybe it'll be better?