Book Review: From Bad to Cursed by Katie Alender 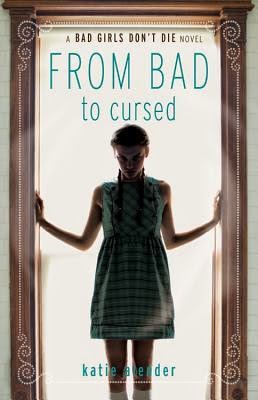 Outline:
Alexis is the last girl you'd expect to sell her soul. She already has everything she needs--an adorable boyfriend, the perfect best friend, and a little sister who's finally recovering after being possessed by an evil spirit, then institutionalized.
Alexis is thrilled when her sister joins a club; new friends are just what Kasey needs. It's strange, though, to see how fast the girls in The Sunshine Club go from dorky and antisocial to gorgeous and popular. Soon Alexis learns that the girls have pledged an oath to a seemingly benevolent spirit named Aralt. Worried that Kasey's in over her head again, Alexis and her best friend Megan decide to investigate by joining the club themselves. At first, their connection with Aralt seems harmless. Alexis trades in her pink hair and punky clothes for a mainstream look, and quickly finds herself reveling in her newfound elegance and success.
Instead of fighting off the supernatural, Alexis can hardly remember why she joined in the first place. Surely it wasn't to destroy Aralt...why would she hurt someone who has given her so much, and asked for so little in return?

Quick Thought (or not)
When I first read BGDD, I knew I was going to enjoy it because I love the supernatural, and ghosts are always fun to read for me. I get some kind of thrill reading books about them (Anna Dressed in Blood, Through Her Eyes). As much as I loved the first one this one didn't quite have that punch and "ahhh hell" moments. Instead of being a spooky, possessive ghost it was a demonish thing that whispered in their heads. It just wasn't a "villain" I cared to much about. Maybe, if it was more of a physical demon then yes. Whispers in the head some more like she was just sick. Does that make sense?

Pacing
It was  little slow getting to some of the major plot points, and sometimes I found myself wanting to skip ahead, and that just doesn't seem right. Shouldn't I want to read each and every word to get to the plot so I have the details on how the characters ended up there?

Ending
Cliffhangers can either leave you content, and okay until the next book comes out (assuming there's more than one) or leave you banging your head on the table. (Just don't give yourself a concussion doing that)
The ending for this one was actually pretty good. It tied up most the loose ends, but left just a little for As dead as it gets. I'm interested to see how the next book plays out.
Posted by Ashley @ Bookaholics Anonymous at 11:23 PM