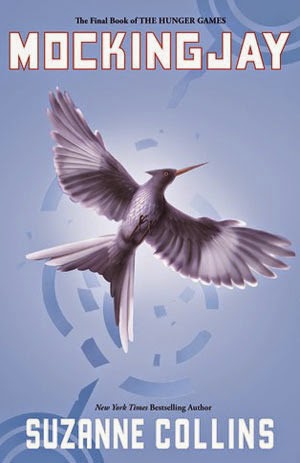 Outline:
My name is Katniss Everdeen.
Why am I not dead?
I should be dead.
Katniss Everdeen, girl on fire, has survived, even though her home has been destroyed. Gale has escaped. Katniss's family is safe. Peeta has been captured by the Capitol. District 13 really does exist. There are rebels. There are new leaders. A revolution is unfolding.
It is by design that Katniss was rescued from the arena in the cruel and haunting Quarter Quell, and it is by design that she has long been part of the revolution without knowing it. District 13 has come out of the shadows and is plotting to overthrow the Capitol. Everyone, it seems, has had a hand in the carefully laid plans--except Katniss.
The success of the rebellion hinges on Katniss's willingness to be a pawn, to accept responsibility for countless lives, and to change the course of the future of Panem. To do this, she must put aside her feelings of anger and distrust. She must become the rebels' Mockingjay--no matter what the personal cost.

Quick Thought (or not)
It may or may not come as a shock to some of you, but I wasn't a fan of The Hunger Games or Catching Fire. -hangs head- If you read those reviews you noticed how I said I would keep at the series. Yes, it took me two years, and 2 movies later to finally finish the series but I did it and now I can officially say that I am glad I stuck with it. As much as I disliked the first two books because let's face it they were basically the same..No? I was happy with the way Mockingjay was done.

Pacing
Yes, at times I found it to be pretty slow paced, but I have to admit at least we're not sitting in the arena the whole book like we did with the first two. I liked that we saw a few different places. We got to see the different districts, the capitol, and then district 13 of course. Like the other two books this one had action that eventually picked up, and moved the book along. If not for the action and fighting it could have fell flat for me.

Characters
As strong as Katniss was in the first two books, I will say that her character felt somehow different in this one. Which I guess going through two games will do that to a person. It was like she had a bit of a split personality in my opinion. There were moments where that fierce girl we loved in the games would show, and then moments where she seemed like this fragile little girl.

Ending
*Spoiler alert*
In my eyes the ending couldn't have been better. I personally liked the person that Katniss ended up with I felt that they had some kind of connection and a better understanding of each other then the other one. I will say that I suspected something was a bit off with Coin, and was a bit perplexed with Katniss' reactions, but none the less I had a feeling.

Quotes
Dead, but not allowed to die. Alive, but as good as dead. -Katniss