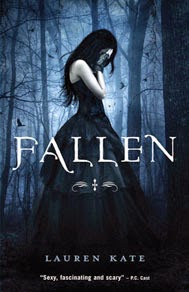 Outline:
What if the person you were meant to be with could never be yours?
17-year-old Lucinda falls in love with a gorgeous, intelligent boy, Daniel, at her new school, the grim, foreboding Sword & Cross . . . only to find out that Daniel is a fallen angel, and that they have spent lifetimes finding and losing one another as good & evil forces plot to keep them apart.
Get ready to fall . . .

Quick Thought (or not)
I'm pretty sure this has been said many times before but the cover is what drew me into this book. I'm sorry I don't care how many times they use a girl in a fancy dress as a book cover, I will forever and always love them especially if the colors are right like Shatter Me (before they did the awful cover change), Teardrop (before they went and changed it as well), The Selection Series.

I realize I'm just getting around to reading this series actually it's the first book by this author I've read granted I have Teardrop and The Betrayal of Natalie Hargrove. I guess it wasn't until now that I felt compelled to read it. Maybe, seeing the book being turned into a movie also helped.

Going back and reading some reviews, I believe a lot of them had it right saying that it was a bit slow to begin with, and honestly not much of a plot. I don't know if the plot just isn't there because it's a first book (which would be my guess), or if it is there, but I just didn't pick up on it. Fallen was more of a character story. It was Luce getting sent to this boarding school, and meeting these two hot, mysterious guys, one whose bound to be good, and one bound to be bad it's typical. It followed Luce through her stalkerish ways to find out more about this Daniel who would be hot and cold with her.  As she was doing this she also had the attention of the other guy Cam, who I'm going to admit I kinda fell for in the beginning. Boy was I stupid to do that. The story really didn't pick up and get past this love triangle until almost the end when the climax of the story took place. Which wasn't really that great of one because what could have been an awesome scene was skipped over to go back to Luce who was of course the damsel in distress...-hangs head- ... although the little part that was put into that scene was sad.#RIPcharacter

Lucinda or Luce is a MC in the story, and in the beginning I really kind of felt bad for her. I couldn't deal with switching schools. I had a hard time transitioning from elementary to middle and then middle to high school so a completely different school where you don't know anyone would be hard. She seemed like she did okay finding a few off the wall characters to be friendsy with. (Why yes I did just say friendsy!)(Friendsy- to engage in somewhat of a friend like manner) I felt bad that she had to go through whatever she went through with that Trevor boy, but I don't know as the story progressed I felt less and less sorry for her. I hope later on in the series I grow to like her more.
Going into the story already knowing what Daniel was kinda sucked a bit, but I guess if you think about it....it would have been pretty obvious had the synopsis not stated it. The details that Luce gave about what she saw in her dreams, and during other times was pretty much saying look at me I'M AN ANGEL!. I will say at the start of the story he was a complete jackass, and his on again/off again bs was getting to be a bit much. As the story went on I started leaning towards Daniel though more then Cam for obvious reasons later on. So I forgive Luce a bit for feeling the same.

Cam was a bit harder to figure out at the beginning of the story because he genuinely seems to like Luce, and I'm sure he still does, but for them not being together he sure seemed possessive and jealous. If the girl is not your girlfriend calm the F down man.

Then there was tiny Pennyweather "Penn" Van Syckle Lockwood. I loved her just for her odd name :) but really she was a sincere friend that Luce made, who pretty much had the run of the school, and along with Luce she helped find out more about Daniel.

As for the ending to Fallen...-bangs head-