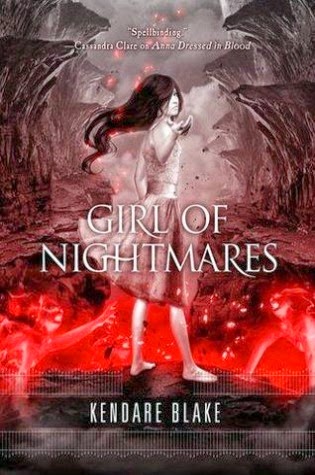 AUTHOR: Kendare Blake
PUBLISHER:  Tor Teen
PAGES: 332
STAND ALONE/SERIES: Series (Anna dressed in blood)
SOURCE: Bought
OUTLINE:
It's been months since the ghost of Anna Korlov opened a door to Hell in her basement and disappeared into it, but ghost-hunter Cas Lowood can't move on.
His friends remind him that Anna sacrificed herself so that Cas could live—not walk around half dead. He knows they're right, but in Cas's eyes, no living girl he meets can compare to the dead girl he fell in love with.
Now he's seeing Anna everywhere: sometimes when he's asleep and sometimes in waking nightmares. But something is very wrong...these aren't just daydreams. Anna seems tortured, torn apart in new and ever more gruesome ways every time she appears.
Cas doesn't know what happened to Anna when she disappeared into Hell, but he knows she doesn't deserve whatever is happening to her now. Anna saved Cas more than once, and it's time for him to return the favor

G.O.N was definitely not what I thought it would be like. Honestly I think the cover is what I most liked about the book. -hides- Don't get me wrong it was still good and I enjoy Kendare Blake writing. No doubt! The story itself didn't have that grip on me like Anna dressed in blood did. Where Anna was a creepy read, I didn't feel that with this one. Did Anna just lose her edge because of the outcome in book one? Maybe?
Carmel and Thomas didn't really hold their own either. I loved their interactions in AD in B, but in G.O.N it felt like they were forced together here. Which sucks because I thought they made for a cute and interesting couple. Couples have their issues, and maybe thats what this was.
The new characters also were blah to me. I just couldn't get into them. Jestine just seemed like a bitch, and maybe it's because of who she was and what she was trying to accomplish. Who knows. Then we got to meet the famous Gideon when Cas and everyone went over seas to see if they could help get Anna.
The book cover and title itself did fit with the storyline. Cas kept seeing Anna trapped in hell, and knew from the first book he wasn't going to give up trying to get to her, even if it meant traveling to another country. It was a bit slow up til the point where they traveled. Then the adventure they had trying to find the entrance to hell was a bit more enjoyable.