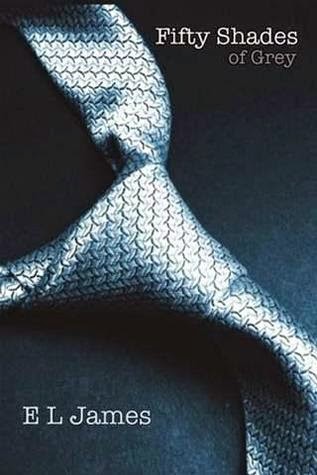 AUTHOR: E.L James
PUBLISHER:
PAGES: 356
STAND ALONE/SERIES: Series (50 Shades)
SOURCE: Bought
OUTLINE:
When literature student Anastasia Steele goes to interview young entrepreneur Christian Grey, she encounters a man who is beautiful, brilliant, and intimidating. The unworldly, innocent Ana is startled to realize she wants this man and, despite his enigmatic reserve, finds she is desperate to get close to him. Unable to resist Ana’s quiet beauty, wit, and independent spirit, Grey admits he wants her, too—but on his own terms.

MY THOUGHTS
My curiosity got the better of me, plus some other contributing factors went into me reading it. Curiosity being the first then with the movie coming out I wanted to be able to compare the two. I know you shouldn't do that, but this book just seemed like I would have to read it to be able to say whether or not I actually would like the movie. That remains to be seen. Also when I worked at B & N I always passed the little table we had set up for it.
With that being said here is what I thought. Did it suck? Not like I thought it would. I was waiting for this epic train wreck to happen (even though train wrecks aren't at all epic and a bit frightening kind of like Christian at times.) Did I love it?  No, there was a lot about it that I found to be ridiculous. I'll get to that in a moment, but I'm not going to say it was trash and rag on it. I will tell you the problems I had with it. While it'll probably sound like I'm contradicting myself (and I know I will) this is why I would give it 3 stars if I did the star rating on here.

-Read at your own risk-
The Story

The Characters
The characters are all kinds of craziness. There are things about each of them that had me wanting to pull my hair out. Then there were things about them that I found almost normal.
Ana's stupidity.
Don't get me wrong I enjoyed her character. I felt like in ways I could relate to her. If you try to get me to open up to you face to face it's more than likely not going to happen, but give me a phone, a laptop, or somewhere I can write it down, and you will have my feelings flat out, every pissed off, sad, happy thought. I'm just not good with face to face confrontation. Which seems like Ana a bit.


"You have no problem being honest with me in print. Your emails always tell me exactly how you feel. Why can't you do that in conversation." pg 268

But the fact that's she's ignores the clear warnings from Mr. Grey as shown below

"Anastasia, you should steer clear of me. I'm not the man for you."pg 49

"Anastasia, I'm not a hearts and flowers kind of man...I don't do romance. My tastes are very singular. You should steer clear of me." He closes his eyes as if in defeat. "There's something about you though, and I'm finding it impossible to stay away."pg 72

"Anastasia, you should steer clear of me. I'm not the man for you. I don't do the girlfriend thing. I'm not a hearts and flowers kind of guy. I don't make love. This is all I know. pg 230

shows us how frustrating she can be to the reader. Oh, and her inner goddess I wanted to rip her out. Ana was definitely naive at first when it came to things that Christian did, and I believe he pulled her into things she wasn't ready for, but all Ana seemed to care about was trying to "fix" him
Christian, the CEO of Grey Enterprise, at first glance he seems normal. He's this hot, rich, but we learn later that he has a dark past that has also molded him into this other person. I'll admit I like the Christian that is carefree and gives to the world, the one who opened up to Ana, the one who let his guard down. Like below.

Gingerly, he moves over and puts his arms around me and pulls me to his chest. "Sleep, baby," he whispers. pg 289