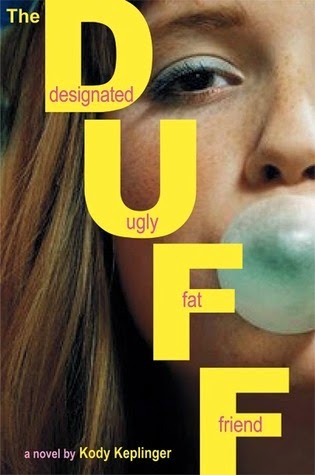 AUTHOR: Kody Keplinger
PUBLISHER: Little Brown/Poppy
PAGES: 3277
STAND ALONE/SERIES:stand alone
SOURCE: Bought
OUTLINE:
Seventeen-year-old Bianca Piper is cynical and loyal, and she doesn’t think she’s the prettiest of her friends by a long shot. She’s also way too smart to fall for the charms of man-slut and slimy school hottie Wesley Rush. In fact, Bianca hates him. And when he nicknames her “the Duff,” she throws her Coke in his face.
But things aren’t so great at home right now, and Bianca is desperate for a distraction. She ends up kissing Wesley. Worse, she likes it. Eager for escape, Bianca throws herself into a closeted enemies-with-benefits relationship with him.

Until it all goes horribly awry. It turns out Wesley isn’t such a bad listener, and his life is pretty screwed up, too. Suddenly Bianca realizes with absolute horror that she’s falling for the guy she thought she hated more than anyone.

MY THOUGHTS
I'm not gonna lie the only reason I decided to retry reading this book is because of the movie coming out. The first time I tried to read it I only got 80 pages in. It didn't have enough to hold my attention, and to be honest it still didn't have anything. However, I did  finish it this time because I hate giving up on books, and I want to see how the movie and book differ if at all.


The only reason it made it to almost 3 stars is because I liked the message it was trying to send to the readers. Ask any of your friends and you'll be surprised to learn that they probably see them self as The Duff. The ugly one, the fat one, so on and so forth. The problem with this is you're giving everyone else the power to define you. I could look at the group of friends in high school I had, and realize that could have been me. My friends always had some kind of relationship, always worrying about what they looked like, could make friends easily. Me not so much. I was definitely the cynical, morbid one. I don't think I have yet to get out of my awkward stage. Yes, I'm married, and I've grown, but there is still that little part of me that sees the word Duff and can relate to it. This though is pretty much where the book stopped having any connection to me.

The whole story line aside from this word The Duff was generic and cliche to me. Is that being a bit harsh? Maybe, it is but you have this girl who has problems and runs from them into some douche-bags arms and sleeps with him over and over again to get a high, and you know it's wrong. It's not going to change the way things are at home. So you're not like an addict...you are. It's called a sex addict. You get a rush from it, or a high as you would call it. I don't care how sweet he becomes in the end. Then in walks this other boy, Toby. Yes darlings it's that damn dreaded triangle. This boy who she's been crushing on for a few years finally talks to her just as feelings for the D-bag form.

Really?
This is how I feel.
Here you have this sweet boy who is trying to be a friend. He's everything you wanted, but all you see is this other guy. How about trying to help, or work on the problems you have at home. Bianca just pisses me off. I have a strong dislike for her.