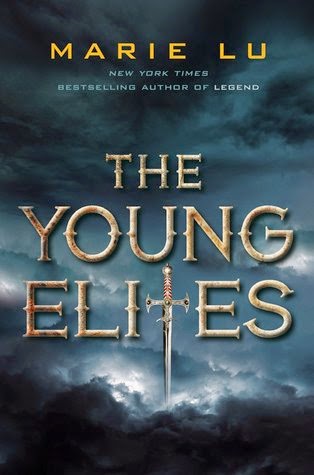 OUTLINE:
I am tired of being used, hurt, and cast aside.
Adelina Amouteru is a survivor of the blood fever. A decade ago, the deadly illness swept through her nation. Most of the infected perished, while many of the children who survived were left with strange markings. Adelina’s black hair turned silver, her lashes went pale, and now she has only a jagged scar where her left eye once was. Her cruel father believes she is a malfetto, an abomination, ruining their family’s good name and standing in the way of their fortune. But some of the fever’s survivors are rumored to possess more than just scars—they are believed to have mysterious and powerful gifts, and though their identities remain secret, they have come to be called the Young Elites.Teren Santoro works for the king. As Leader of the Inquisition Axis, it is his job to seek out the Young Elites, to destroy them before they destroy the nation. He believes the Young Elites to be dangerous and vengeful, but it’s Teren who may possess the darkest secret of all. Enzo Valenciano is a member of the Dagger Society. This secret sect of Young Elites seeks out others like them before the Inquisition Axis can. But when the Daggers find Adelina, they discover someone with powers like they’ve never seen. Adelina wants to believe Enzo is on her side, and that Teren is the true enemy. But the lives of these three will collide in unexpected ways, as each fights a very different and personal battle. But of one thing they are all certain: Adelina has abilities that shouldn’t belong in this world. A vengeful blackness in her heart. And a desire to destroy all who dare to cross her.It is my turn to use. My turn to hurt.

MY THOUGHTS
(Minor Spoilers)
The Young Elites is a darker fantasy version of The Darkest Minds. Okay well it is to me anyways. This is why...POWERS. Sickness/disease/plague.

The difference bet-><-ween the two though Ruby and her friends stuck together.

The Young Elites makes you root for the bad guys. I know you're thinking why the hell would you do that right? The Young Elites is not a heroine book. The MC does not walk out of this story fulfilling some awesome destiny. She doesn't save the day. Nobody praises her with gifts and riches. This book is for those who love villains. I can't say that I'm proud of any of the characters. They all had crappy motives. They all used one another to gain something else that would better benefit them. Heroes don't do that. I know it sounds like I'm against the book, but I'm actually not! I loved Marie Lu's writing and the way she twists her characters. Not one of them seemed to live a happy childhood. Even ones that did...didn't. You'll understand if you read it. One can't truly be happy if there are secrets hidden.

I can say while I wasn't proud of the choices the characters made that in some situations I can see why they did what they did. My family would come first over strangers any day (even if I couldn't stand them at times.) I think I definitely had a love/hate relationship with all the characters. While none of them were weak, they're actions spoke words. If I  had to choose one I would say Enzo was probably my favorite because he believes a little bit more in Adelina than the others.

I enjoyed Marie Lu's Legend (I only read the first book. The other two are on my shelf) It was one of the first Dystopians I read besides Enclave and Divergent. Just like that this is one of the first Fantasies I've really read and got into. (I should really read Graceling or The Girl of Fire and Thorns now.) Usually the world building just seems so far-fetched, and I get that it's suppose to, but I spend time trying to figure it out that I don't enjoy what I'm reading. So I try to not focus so much on the names and places, and more on the story at hand. Once I did that...it worked.

The ending for me pretty much sucked because I wanted a satisfying ending for certain characters. It just means I will be waiting impatiently for the second book which is The Rose Society.