What I picked this week?
Partials by Dan Wells
Published February 28th 2012 by Balzer + Bray 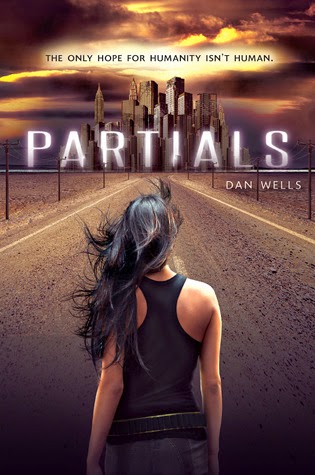 Humanity is all but extinguished after a war with Partials—engineered organic beings identical to humans—has decimated the population. Reduced to only tens of thousands by a weaponized virus to which only a fraction of humanity is immune, the survivors in North America have huddled together on Long Island. But sixteen-year-old Kira is determined to find a solution. As she tries desperately to save what is left of her race, she discovers that that the survival of both humans and Partials rests in her attempts to answer questions about the war's origin that she never knew to ask.
Playing on our curiosity of and fascination with the complete collapse of civilization, Partials is, at its heart, a story of survival, one that explores the individual narratives and complex relationships of those left behind, both humans and Partials alike—and of the way in which the concept of what is right and wrong in this world is greatly dependent on one's own point of view.
Supports the Common Core State Standards

Why I picked this?
It's been sitting on my shelf for some time, and when it first came out I knew it was one that I would read. The dsytopian genre fascinates me. Also I think I try and give hyped books a little time to cool off.