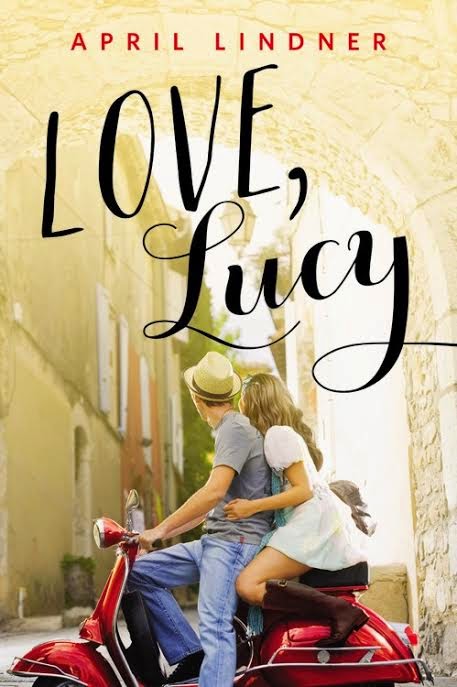 AUTHOR: April Linder
PUBLISHER:  Poppy
PAGES: 304
STAND ALONE/SERIES: Stand alone
SOURCE: E-Arc from Netgalley
OUTLINE:
While backpacking through Florence, Italy, during the summer before she heads off to college, Lucy Sommersworth finds herself falling in love with the culture, the architecture, the food...and Jesse Palladino, a handsome street musician. After a whirlwind romance, Lucy returns home, determined to move on from her "vacation flirtation." But just because summer is over doesn't mean Lucy and Jesse have to be, does it?
In this stunning novel, April Lindner perfectly captures the highs and lows of a summer love that might just be meant to last beyond the season.

MY THOUGHTS
I'll admit I haven't read any of April Linder's other re-tellings like Jane or Catherine, but if they're similar to this then I don't know what I've been waiting for. I'm not a huge fan of romance-y type books, but sometimes I need a little fluff. Love, Lucy is definitely that fluff read. It gives you that hope that sometimes summer romance turns into something more, or that Paris fling turns into a thing. :)

Love, Lucy was told in two parts.
Part one: Italy
Part two: Philadelphia
and then an epilogue of sorts called Florence

Part one: Italy
As slow as the beginning was I still really enjoyed the story. In Italy, Lucy roams about with her friend, but what she doesn't expect is to fall for a guy who they kick out his hotel room. How does that even work? Steal the guys room and steal a kiss.  I guess. Over the course of being in Italy Lucy ends up spending more time with Jess, and less with the friend she came with. Musicians always seem to fall in love so easy which I guess I can understand. Play me a song, and it's on. I think that's a sweet gesture. When Lucy's time in Italy was over I became a little sad. I didn't really care to see her life at a school, or anywhere Jess wouldn't be. A deal is a deal though and she had to return to the states and keep the promise she made to her dad.

"Well, you can't have the spotlight and the applause without the auditions and the stage fright," Sarah said.