Book Review: Queen of the Dead by Stacey Kade 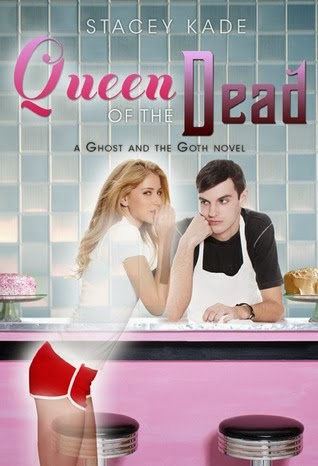 AUTHOR: Stacey Kade
PUBLISHER:  Hyperion
PAGES: 304
STAND ALONE/SERIES: Series (The Ghost and the goth, Body and Soul)
SOURCE: bought
OUTLINE:
The Ghost
Okay, I admit it. I'm not perfect, no matter what you've heard. First off, I'm dead. Second, I got send back from the Great Beyond. I mean, seriously, who is running things up there? Now I have to spend the summer after my senior year working - and on behalf of a bunch of whiny spirits, no less. But a girl's got to what a girl's got to do.
It's a good thing Will Killian is still around. Even though he drives me crazy, and he could seriously do with a tan - Hello! It's summer! - I'm glad he's here to help me. Now he's all distracted by this frizzy-aired girl who can - big deal - communicate with the dead, too. Whatever. I don't need Will. But there are some things - like saving my parents from a couple of horrible mistakes - that would be easier with his assistance. Still, I will get what I want... with or without him.
The Goth
I'm still totally amazed that Alona Dare is my spirit guide and that it works. Yes, I've had a crush on her since sixth grade, but I also kind of hated her. And sure, she had to die before she'd talk to me - but I don't know, I kind of like having her around.
Things get confusing when I meet Mina, who's the first ghost-talker I've ever encountered (other than my dad). I always thought Alona and I were doing the right thing helping those other ghosts, but mina has me thinking otherwise. Plus, she might know stuff about my dad that even my mum doesn't. But if there's one thing I should have learned by now, it's not to ignore Alona. That's never a good idea.

MY THOUGHTS
I'm not going to lie the covers are what really had me interested in the series. Suffice to say that I've not had a problem with the first two books. The Ghost and the Goth was definitely a first book. We met the characters, we dove into the lives a little bit. We got just enough that we wanted to know more.

I really enjoyed Queen of the Dead. Alona and Will find new troubles as they continue to play ghost hunters. Although they begin their stories together in Queen of the Dead they start to drift and Will becomes invested in learning about this group of ghost talkers who claim to have known his dad. They want him to join their cause, and while doing so he neglects to  help Alona whose persistence to help her family not forget her causes more of a problem. She gets herself stuck in Will's comatosa friend.

You really got to hate to love Alona (yes I know it's love to hate, but go with me here.) even in death she knows what she wants. She'll step on people to get what she wants, but I love that she also knows how to show compassion when needed. I can't wait to read the next book to see how she gets outta the predicament shes in.

Poor Will is stuck between what he's always done, and what he's found out so which one is right?

Posted by Ashley @ Bookaholics Anonymous at 10:39 AM

Email ThisBlogThis!Share to TwitterShare to FacebookShare to Pinterest
Labels: 2015, ghosts, stacey kade, the ghost and the goth series