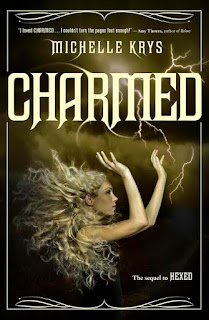 Indie has spent the last few weeks frantically searching for Paige. She's tried every spell imaginable, but witchcraft has gotten her nowhere, and she's going crazy with guilt. Despite what her warlock boyfriend, Bishop, tells her, Indie knows it's her fault her best friend was kidnapped by the Priory. And with the Priory destroyed, finding Paige feels more hopeless than ever-especially when Indie discovers that Paige isn't even on Earth. She's trapped in Los Demonios, an alternate dimension of Los Angeles filled with evil paranormals. No one who has gone there has ever come out.
Fueled by terror and loyalty, Indie is desperate to find a way into the underworld prison. She'll worry about getting out later. But facing the dark world's most dangerous witches and warlocks on her own means keeping her plan hush-hush-and forging alliances with some sketchy people, including a seriously sexy sorcerer.
Sometimes a witch must keep secrets from the people she cares about most. And sometimes she isn't the only one with secrets…

The stakes are definitely upped in Charmed the second book in Michelle Krys' Hexed Series.
Ever since Indie found out she was a witch, and her life went through the ringer it seems to be non-stop.  She doesn't know where her BF Paige is at, but she will STOP at nothing to find her. Even if it means going against the people who care for her (and are just trying to keep her safe.)

Basically the story revolves around Indie trying to find Paige and when she learns that she's trapped in a witch/wizard prison she finds a way to get there, and along the way meets some helpful (and hot) guides. Not only that, but she learns truths about others and herself that could either break or make her.

Indie is definitely becoming a favorite of mine for so many reasons. I mean sure she started off kind of bratty and snobby, but she's grown so much. She's caring and loyal to a fault, determined, strong willed and like I said will stop at nothing to find her friend. :)  I enjoyed seeing her powers become something more than just flying, and what not.

Then you still have Bishop hanging around. We really didn't see a whole lot of him like I wanted. :( We did get to meet another yummy character named Cruz (see a paragraph above).

There are definitely some unfortunate events that happened that made me wanna cry.